SEOUL, May 31 (Yonhap) -- A Thai national has been arrested and indicted for smuggling 134,000 doses of methamphetamine into South Korea, prosecutors said Monday.

According to the Suwon District Prosecutors Office in Suwon, south of Seoul, the Thai national, identified only as a 32-year-old, was handed over to a court trial after being apprehended for attempting to import the massive amount of the banned substance from Thailand via air freight earlier this month.

The meth seized from the Thai national weighed 4 kilograms, which is reportedly enough for 134,000 doses and worth 13.4 billion won (US$12.1 million), prosecutors said. 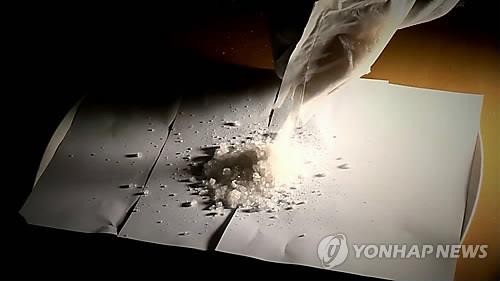 The suspect is charged with receiving the 4 kg of meth hidden in bags of protein supplements through air freight on May 6 after being offered a reward of 200,000 Thai baht, the equivalent of 7.5 million won.

The average amount of smuggled meth seized in South Korea over the past 16 years (2004-2019) was 33 kg per year, and the meth seized from the Thai national amounts to about 12 percent of the annual average seized, prosecutors explained.

In addition, the prosecution also arrested and indicted five other Thai nationals and two South Koreans on charges of smuggling various banned substances, including 170 grams of meth, 1,576 tablets of yaba, 97 grams of ketamine, 55 tablets of ecstasy (also known as MDMA) and 190 pieces of LSC, into Korea via air mail from November last year to this month.

The prosecution said it has been able to crack down on those drug smuggling attempts through its close cooperation with the Incheon Main Customs and other relevant government agencies.