SEOUL, June 6 (Yonhap) -- President Moon Jae-in offered a public apology Sunday apparently over the recent death of a female Air Force officer, who had been sexually assaulted by a male colleague.

"I am very sorry to the people over such an evil practice in the barracks culture that led to the tragic and unjust death," he said during his Memorial Day speech at the Seoul National Cemetery. 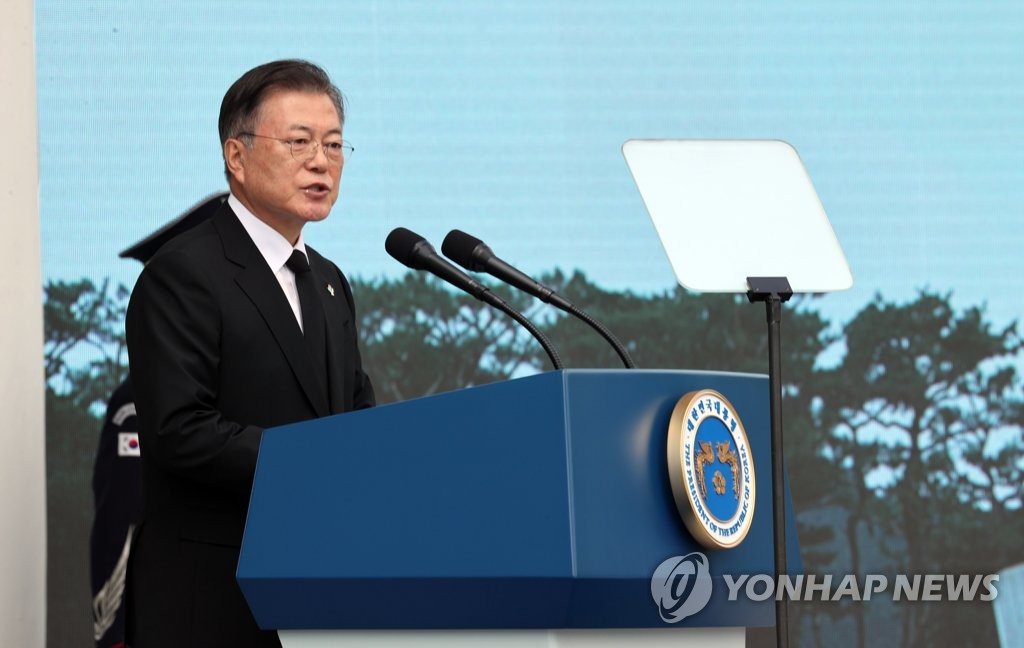 The president stopped short of elaborating, but it was clear he was referring to the noncommissioned officer. She was sexually assaulted in a car in early March and soon reported the case to some of her seniors. But they allegedly attempted to cover it up. She was found dead at her official residence in late May in an apparent suicide.

Moon also cited media reports of poor meals for troops. He pledged efforts to address the problem of such evil practices, not just for the human rights of soldiers but also for their morale and national security.

In veterans affairs, he stressed, it is important to protect the human rights and daily lives of those who are dedicating themselves for the nation.

Moon also said South Korea will gear up for another "big step" in the Korea peace process with a robust alliance with the United States confirmed in his recent summit with President Joe Biden.

He also declared a plan for his government to cope more proactively with the changing international order and security conditions on the basis of the alliance.

He mentioned some major agreements reached during the May 21 White House summit.

The two sides also agreed to develop the alliance as a "more comprehensive" one, he pointed out. 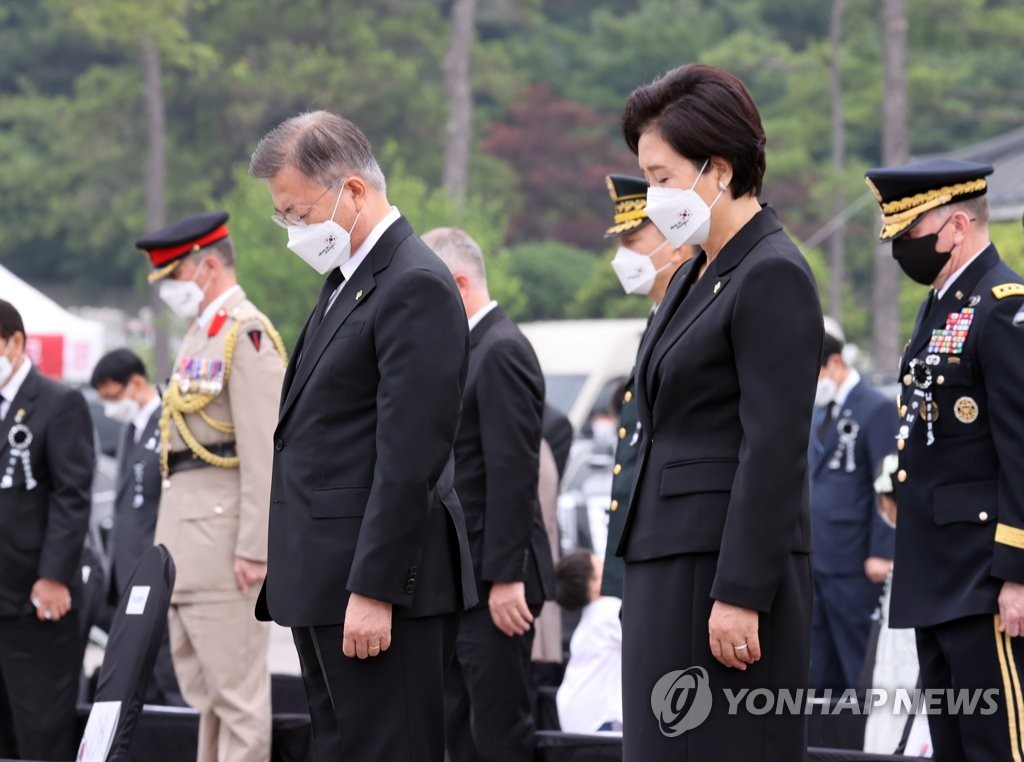 Moon and Biden agreed to work together to overcome the COVID-19 crisis through a strong "vaccine alliance" and terminate the "missile guidelines" that have restricted Seoul's development of missiles.

Ending the 42-year-old guidelines means that South Korea has secured its missile sovereignty and kicked off its push for space exploration, according to the president.

South Korea will "expand space cooperation with the international community, including the U.S., and open the nation's new era of space through the development of its own space vehicle," he stated.

On the project to excavate the remains of troops killed during the 1950-53 Korean War, Moon said the ongoing work in the Arrowhead Ridge area inside the Demilitarized Zone (DMZ) would finish within this year.

Starting in the latter half of 2021, the excavation work will get under way on the nearby White Horse Ridge, he said.

He requested bereaved families' help in the military's campaign to collect DNA samples in order to identify discovered remains.

He then introduced cases of people who sacrificed themselves to save lives beyond borders, saying that patriotism also requires international cooperation and solidarity beyond borders.

He first mentioned Lee Soo-hyun, a South Korean college student who died in 2001 while trying to save a Japanese man who had fallen onto the tracks of a Tokyo subway station.

His sacrifice will be revived someday as the "spirit of cooperation between South Korea and Japan," Moon said amid the prolonged diplomatic stand-offs between the neighboring countries over shared history.

Moon also talked about the "altruism and courage" of Kim Ja-joong, a South Korean man killed in 2013 while trying to rescue a co-worker from Uzbekistan.

In 2018, Win Htut Zaw, an immigrant from Myanmar who had worked at a South Korean factory, donated his organs to people here upon his death, Moon said.

"We send our unwavering solidarity and friendship to the people of Myanmar," he said and added that "Spring in Myanmar" will surely come, just as the 1980 Gwangju uprising led to the democratization of South Korea.