The household debt issue topped the list of key systemic risks cited by market watchers at 46 percent, followed by concerns about global inflation at 37 percent, according to the semiannual survey conducted by the Bank of Korea.

The central bank polled 82 officials at local banks and non-banking institutions in addition to foreign asset managers between May 10 and 25. The survey has been conducted every six months since July 2012.

The results come as bulky household debt remains a chronic bugbear for South Korea, where such debt is feared to sap consumption and possibly trigger a credit risk once interest rates begin trending higher.

In May, the Bank of Korea (BOK) kept its benchmark policy rate unchanged at a record low of 0.5 percent, but BOK Gov. Lee Ju-yeol sounded a slightly hawkish tone when asked about the possibility of a rate hike this year, saying that such a hike "depends on the pace of recovery."

Household credit reached a record high of 1,765 trillion won (US$1.56 trillion) as of March, up 37.6 trillion won from three months earlier.

Household credit refers to credit purchases and loans for households that have been extended by financial institutions, including commercial lenders and mutual savings banks.

The first-quarter tally compared with a 45.5 trillion-won on-quarter rise in the fourth quarter of last year. 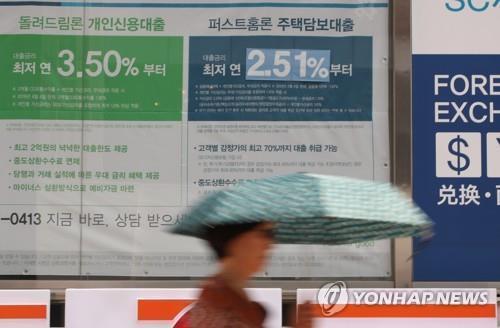