SEOUL, June 11 (Yonhap) -- "F9," the latest chapter in the "Fast and Furious" series, has become the most-viewed movie of the year to date in South Korea, box office data showed Friday.

The American action blockbuster, released on May 19, drew a total of over 2,104,000 moviegoers to the theaters as of Thursday, climbing to the top of the list of the most popular movies in 2021 here, according to the data from the Korean Film Council (KOFIC).

The previous No. 1 was the Japanese dark fantasy animation "Demon Slayer: Kimetsu no Yaiba the Movie: Mugen Train," which has attracted over 2,103,000 viewers since its release on Jan. 27. 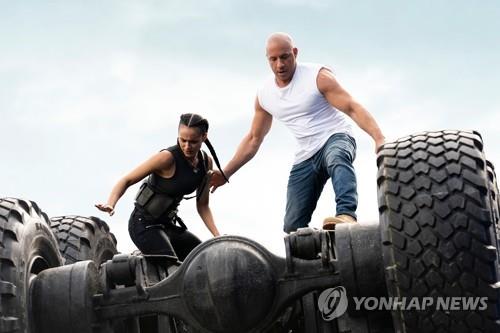 "F9" has been making an impressive run in the pandemic-hit Korean box office.

It posted 400,000 viewers on its opening day to set the biggest first-day score since the new coronavirus pandemic broke out early last year.

It also became the most-viewed foreign film in Korea amid the pandemic by breaching the 2 million admissions mark at the fastest rate over last year's top overseas movie "Tenet" and this year's hit "Soul." It only took 19 days for the Universal Pictures film to achieve the feat.

Christopher Nolan's action thriller and the Disney-Pixar animated film attracted slightly more than 2 million viewers each, according to KOFIC.

To celebrate the success of the action flick here, "The Fast and the Furious," the first installment of the popular series, will be re-released next Wednesday in a 4D format. A 4D edition offers 3D film with physical effects, such as moving chairs, rain and scent.