Seoul and Tokyo had reached a tentative agreement to hold a "pull-aside" meeting between their leaders on the sidelines of the G-7 session in the seaside resort of Carbis Bay in Cornwall, the official said. The three-day gathering ended Sunday.

"From the beginning, our side, with an open mind, expected Japan to respond," the official said on condition of anonymity.

"We think it is regrettable that the Japanese side did not respond to the pull-aside plan, which the two sides had agreed on at a working level, due to the annual drills to safeguard the East Sea territory," he added.

The official was referring to the defense maneuvers that South Korea conducts twice a year to strengthen the defense of Dokdo, to which Japan has persistently laid claim.

Tensions over the rocky outcroppings flared anew recently, as Dokdo has appeared on the map of the route of the Tokyo Olympic torch relay despite concerns that the inclusion of Dokdo could undermine the Olympic spirit of peace free from politics.

In the runup to the G-7 gathering, Seoul had struggled to set up the first in-person meeting between Moon and Suga as part of efforts to address long-simmering issues of Japan's wartime forced labor and sexual slavery.

According to Kyodo News, Suga said that a summit with Moon remains off the table until the historical dispute is resolved.

In a social media post Sunday, Moon said he exchanged greetings with Suga just before the start of an expanded session of the G-7 summit on Saturday, calling the encounter a "precious occasion which may serve as a new beginning in terms of South Korea-Japan relations." 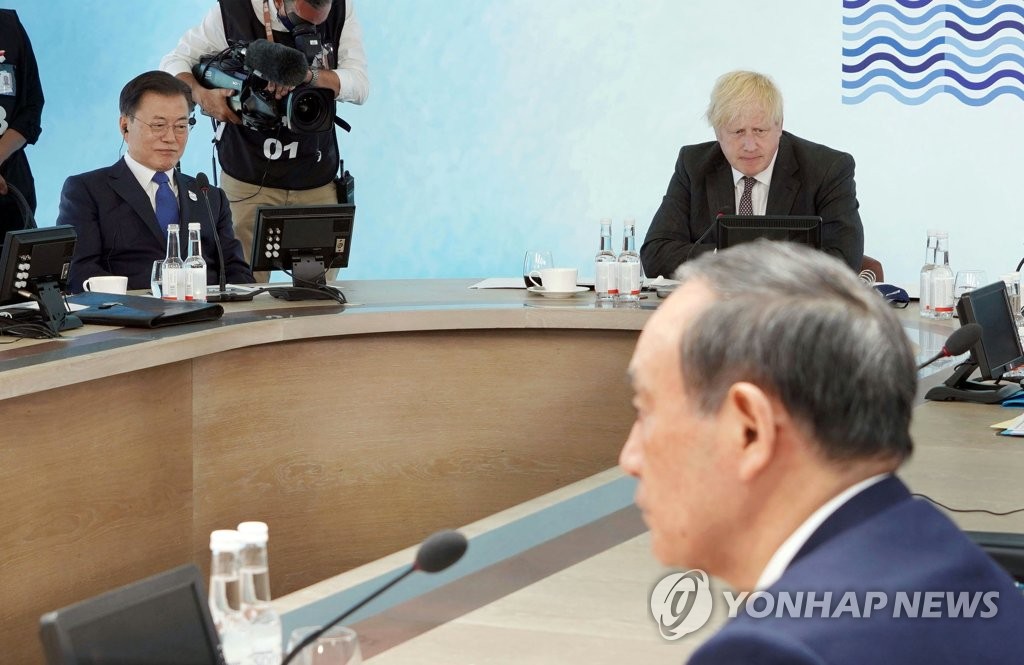