SEOUL, June 15 (Yonhap) -- As the mercury climbed across the country in June, the temperature of Paulo Bento's seat dropped, if ever so slightly.

Bento, head coach of the South Korean men's national football team, became the lightning rod for criticism following his team's 3-0 loss to Japan in a friendly match in March. South Korea, with only one shot on target, were so thoroughly outplayed that the score could easily have been more lopsided. And the loss had come on the heels of some uninspiring performances in earlier friendlies and World Cup qualifiers. 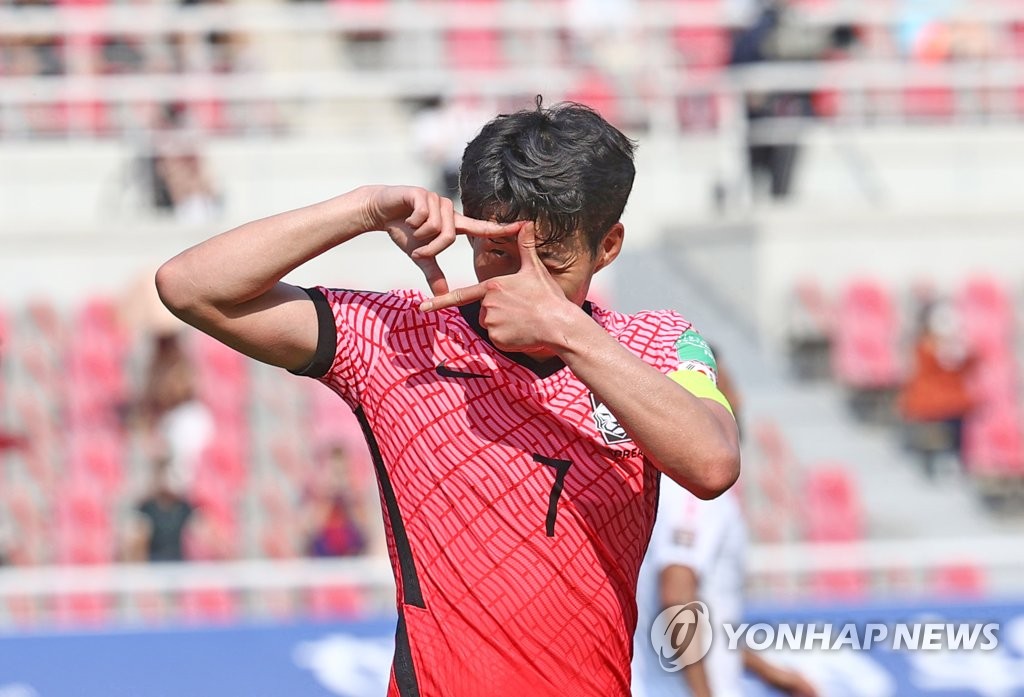 Though the Japan match was just a friendly and there were some extenuating circumstances -- namely that South Korea were missing key internationals, such as Son Heung-min, who was injured at the time -- losing in such lethargic fashion to the country's most hated sporting rival was unacceptable, in the minds of many passionate football fans here.

Against the backdrop, Bento took South Korea into three final matches of the second round in the Asian qualification for the 2022 FIFA World Cup this month. The second round had been on hold since November 2019, as all matches scheduled for 2020 were wiped out by the coronavirus pandemic. To minimize traveling and risks of infection, South Korea served as the centralized venue for all remaining Group H matches this month.

There would be no escape for Bento and Co., playing in front of home fans. They weren't just expected to beat Turkmenistan, Sri Lanka and Lebanon in succession; they had to do so convincingly, so as to quiet detractors and regain the trust of the famously demanding and fickle fan base. 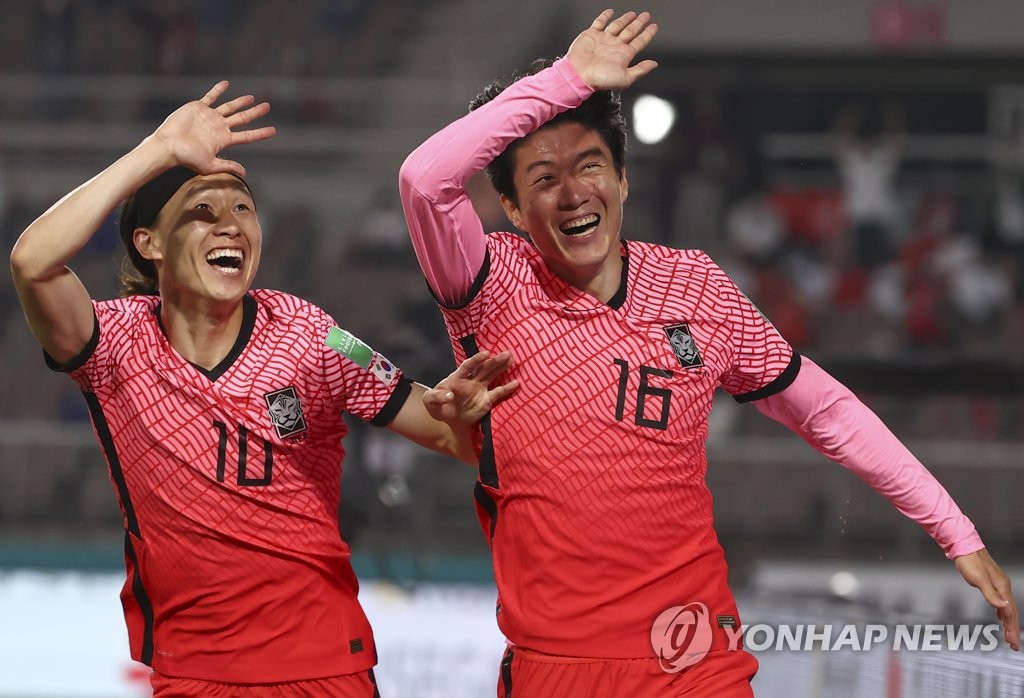 South Korea took care of the winning part, beating Turkmenistan and Sri Lanka by 5-0 each and then rallying past Lebanon 2-1. It wasn't always aesthetically pleasing, especially the Lebanon match last Sunday, but there were encouraging signs in all three victories that indicated Bento's team had turned the corner.

It may be tempting to take these wins for granted and dismiss them as results that South Korea should have had. But let's not forget that beating opponents that they're supposed to hasn't always been South Korea's forte.

When the second round concluded Sunday after South Korea beat Lebanon, Bento spoke about his faith in the path his team has been on.

"I have trust in our process. Despite the small margin of victory (against Lebanon), I believe we've had a good process to get to this point," Bento said. "Our players have all been trying to play quality football." 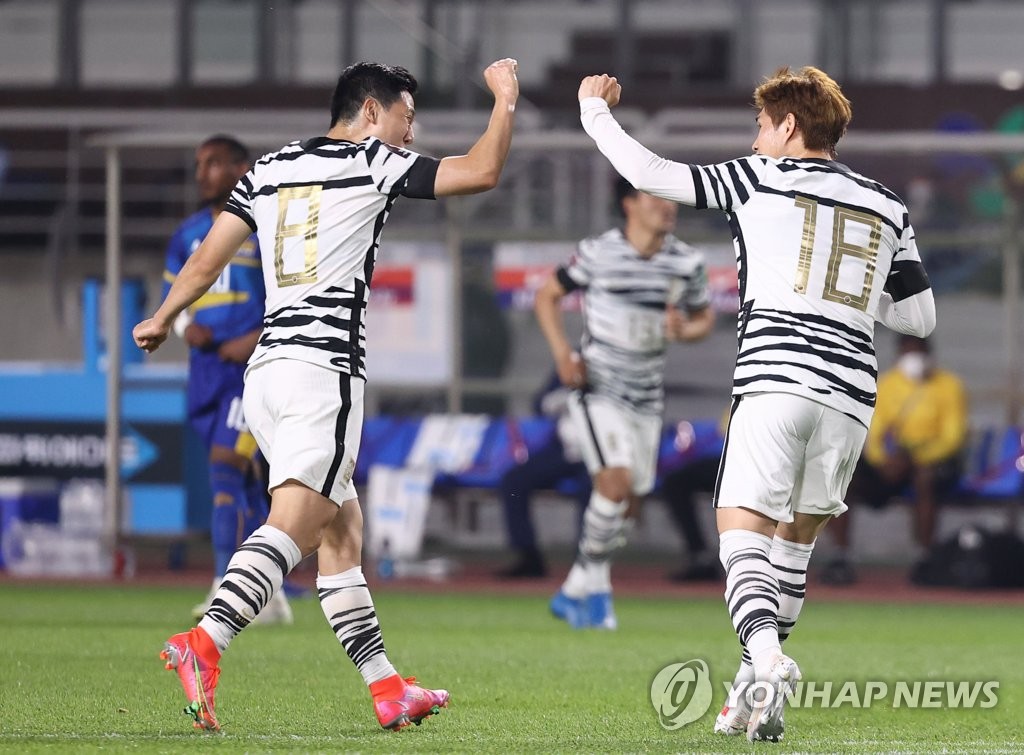 On June 5, the 39th-ranked South Korea overwhelmed the 130th-ranked Turkmenistan in all facets of the game. The underdogs, predictably, set up a low block, putting up a wall deep in their own territory while hoping for the best and fearing the worst. In earlier phases of World Cup qualification, South Korea had to deal with similar tactics on a regular basis.

Against Turkmenistan, South Korea showed far more patience and composure than they had in the recent past. They methodically broke down the barrier and let their skills take over.

Captain Son Heung-min thrived as the facilitator and was a dangerous offensive player even though he didn't score a goal. The attention he drew from opposing defenders opened up space for Son's teammates to exploit. Hwang Ui-jo, Son's favorite side kick up front, netted two of South Korea's five goals.

Bento sent out his "B" squad of reserves against the 204th-ranked Sri Lanka four days later. With only three days between the matches, and another three-day break coming up before the finale against Lebanon, Bento decided to rest his top dogs and unleashed some little-used players. And South Korea didn't exactly need Son or Hwang to handle Sri Lanka, anyway. 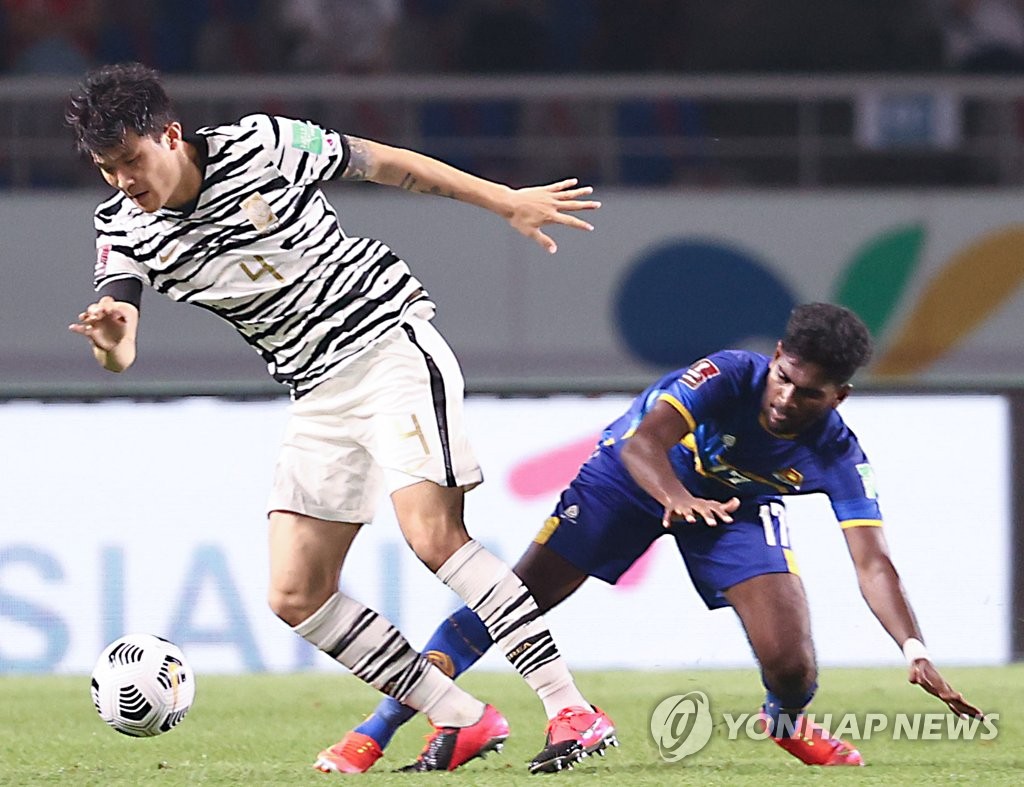 Among 10 new faces in the starting lineup, midfielders Lee Dong-gyeong and Song Min-kyu shined in particular. If Son and Hwang, who will both turn 29 later in the summer, are the present of South Korean football, then Lee and Song, 23 and 21, are its future. Lee had a goal and an assist in his fourth international match, and Song set up Lee's first-half goal in his international debut.

Another youngster, 19-year-old forward Jeong Sang-bin, came off the bench in the 71st minute and got his first career goal some five minutes later.

Given South Korea's depth at their positions, it will be a while before all three get into the same match together. But it was important for them to get some reps in stress-free situations and leave their marks. 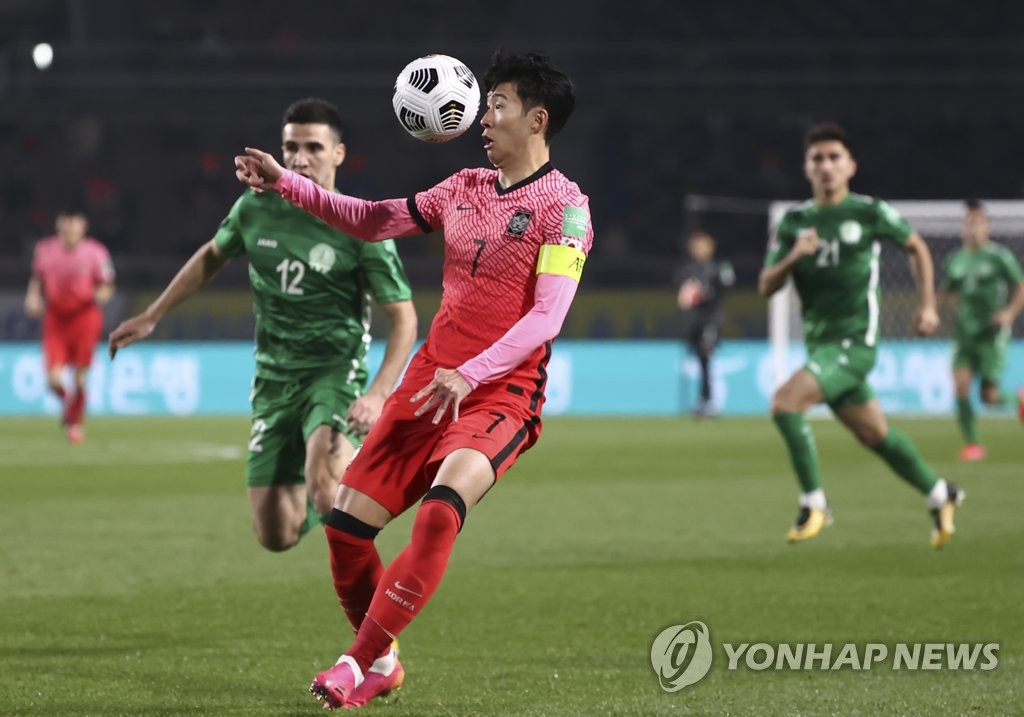 "The door to the national team is always open. The age doesn't matter," Bento said. "We pick players based on their abilities, skills and fit to our style of play. These three players may be young but are quite talented. We called them up this time because we felt we really needed them."

Against Lebanon, South Korea faced their first adversity in this final stretch of the second round. A bad turnover by right fullback Kim Moon-hwan deep in his own zone led to Lebanon's goal in the 12th minute, and South Korea found themselves behind for the first time in the entire round.

They struggled to establish offensive rhythm in their comeback bid, as Lebanese players resorted to time-wasting antics. Though there were some 80 minutes of football left, Lebanon appeared more intent on hanging on for a 1-0 win than on adding to their slim lead. 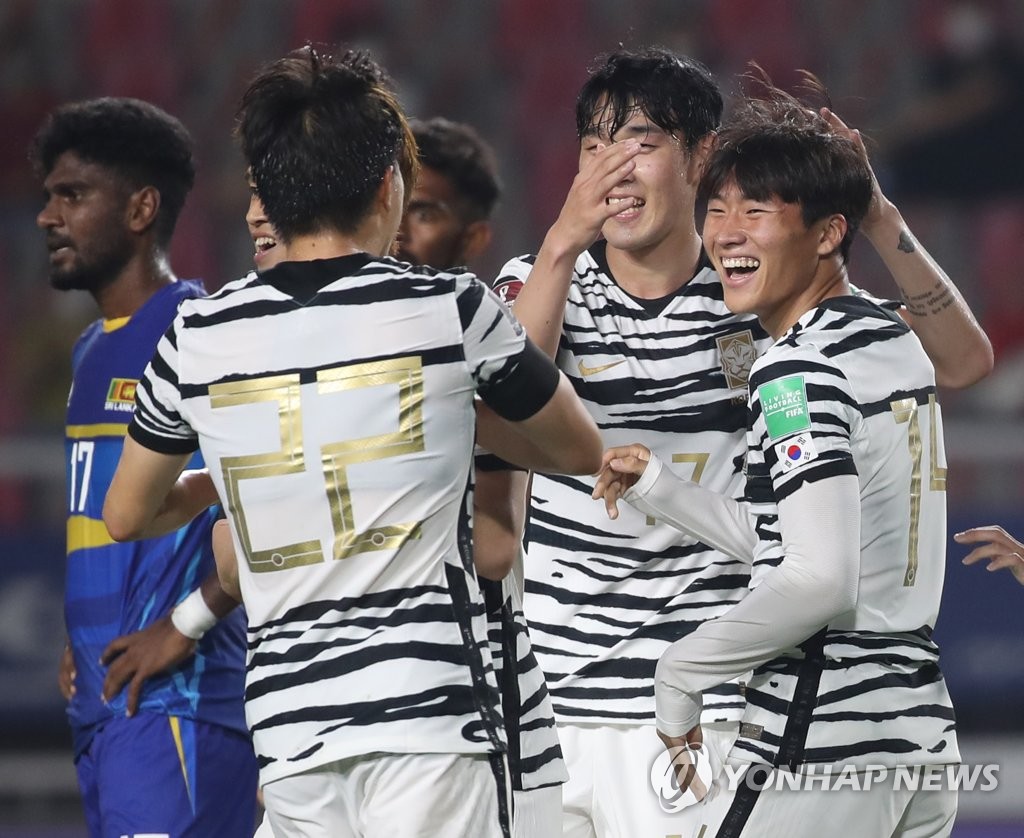 And it worked for the rest of the first half. Lebanese players kept falling on the pitch on any type of contact. They writhed in pain for a few moments but magically got back on their feet, only to fall again the next time.

Referee Khamis Mohammed Al-Marri did little to discourage such behavior, but South Korean players kept calm and mounted a comeback in the second half.

South Korea have failed to beat lesser opponents when they let similar time-wasting antics get in their heads. Son once again played an instrumental role on offense. He set up the equalizer -- Song headed in Son's corner kick off a Lebanese defender and it was scored as a Lebanon own goal -- and scored the go-ahead goal on a penalty. 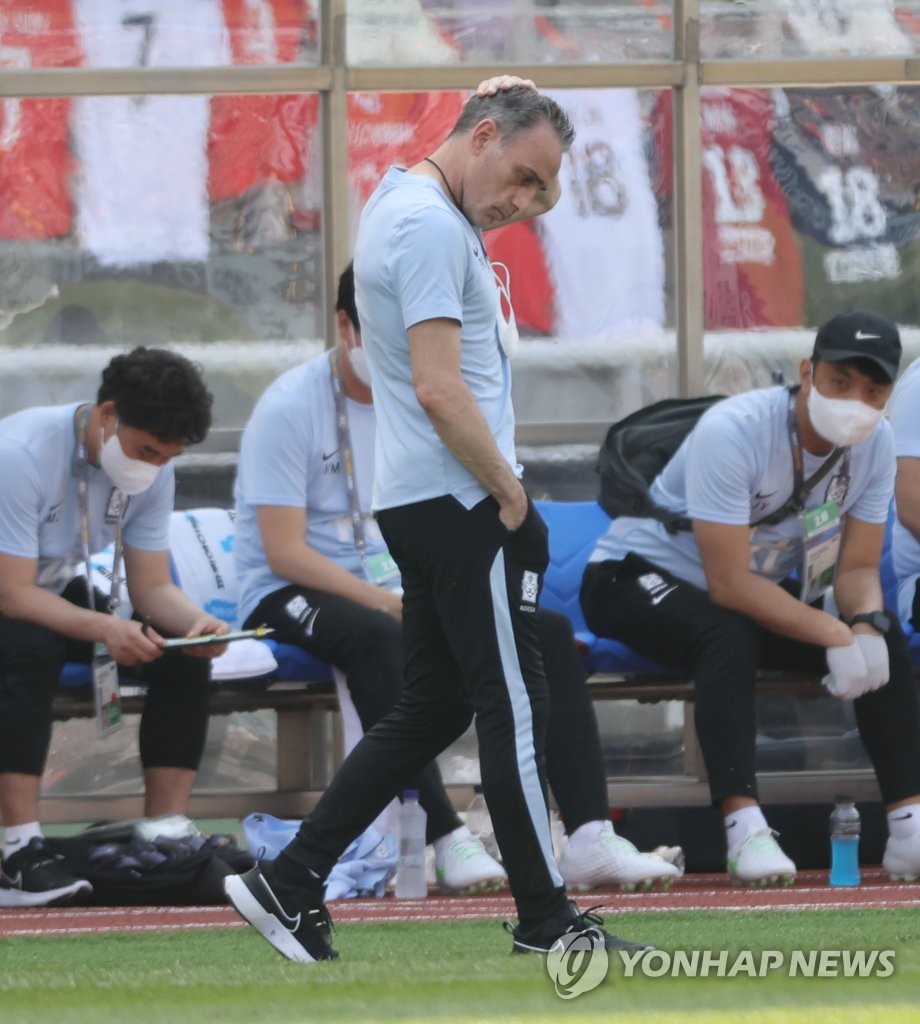 Bento said that just because his players beat Lebanon by only one goal, it didn't mean they played poorly.

"I think we played well enough to have won by more goals today," Bento said. "People tend to reach conclusions based on final scores, but overall, I think our performance was quite encouraging."

Bento said eking out one-goal wins is all part of his oft-stated process.

"In football, these close victories are quite common. You can't win every match by 5-0 or 6-0, especially in modern football," Bento added. "We have to learn how to compete and grow from matches such as this. And the harder the victory is, the more rewarding it feels afterward."

He had some choice words for the officiating crew for their handling of Lebanon's delaying tactics and added: "There's little we can do against things like that. We just have to be ready to take on low blocks and defense-first tactics."

The easy solution is not to give up the first goal or get behind late in matches, though that'll be easier said than done in the next round when the quality of competition will certainly increase.

Speaking of the level of competition: As encouraging as South Korea looked on offense, it's difficult to gauge where they are defensively because they were hardly challenged. 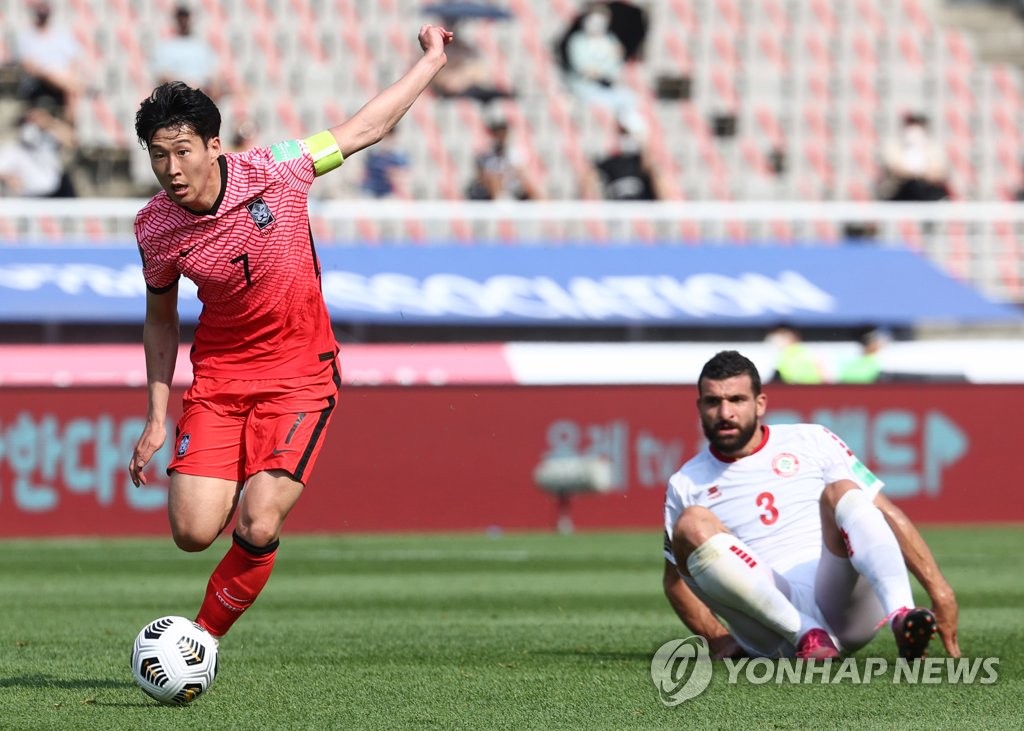 Fullbacks spent more time in the attacking half than their own territory. South Korea often left one centerback manning the defensive zone in front of the goalkeeper, while nine of his teammates kept busy creating scoring chances.

Say what you will about the quality of South Korea's opponents this month. They could only play who was in front of them. And Bento noted that his defensive backs did an admirable job contributing to the offense with buildup plays and thwarting counterattacks.

"Our defenders had strong cohesion with midfielders and forwards. They applied pressure when they had to and did a good job in transition defense," Bento said. "They didn't get pushed deep into the defensive zone all that much. Though things will be different going forward, I think our defenders played well here."

In Bento's offense, defenders have an important role as the starting point of the coach's much-trusted but oft-criticized buildup plays. The scheme demands playmaking abilities, offensive instincts and vision from defensive backs, since it's their passes that help send South Korea's attackers into the enemy territory.

Bento has been panned because of his failure or unwillingness to make in-game adjustments when buildup plays aren't working. These tactics may work against a set defense. But when opponents forecheck hard and put pressure on ball carriers in the South Korean half, then it becomes that much tougher to connect with attackers through long-distance passes. On Bento's watch, South Korea have had trouble finding answers against high pressure. 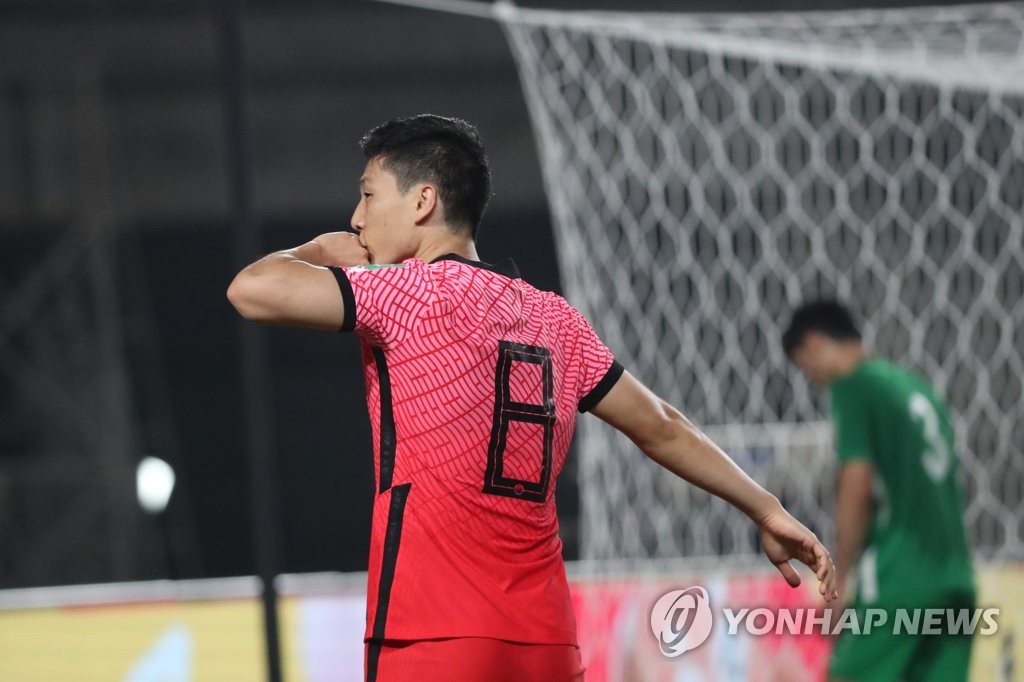 However, what may seem to be Bento's stubbornness to outside observers is a much-welcomed bit of consistency for players. Earlier this month, centerback Kim Min-jae spoke about how easy it is to jump right into Bento's playbook even after an extended absence from the national team.

"It's quite clear what kind of football the coach wants to play," Kim said. "As a defender, I only have to focus on staying the course because our style of play and structure never change."

Bento himself has insisted that he will not deviate from his basic tactical philosophy. It'll be up to players to make it work against tougher competition in the next round.

Leave it to Son, the level-headed captain and the team's voice of reason, to paint the current picture of South Korea.

"Objectively speaking, we have to improve in all aspects of the game," Son said. "The next round won't be as easy as the second round. We have to be better prepared mentally. This will be my third time through the third round, and I know how grueling the journey can be."