SEOUL, June 18 (Yonhap) -- Kim Hyun-seop buys a lottery ticket once in a while, hoping to get on the fast track to his dream: buying a decent home in Seoul.

The 40-year-old office worker commutes from an apartment in Ilsan in northern Gyeonggi Province to the Gangnam district in southern Seoul, which takes about 1 1/2 hours by intercity bus.

"I want to move from my apartment, where I live on 'jeonse,' to reduce my commute, but I can't find an affordable place in Seoul," the father of two children told Yonhap News. "I feel like apartment prices in Seoul have gone beyond my reach in recent years."

Jeonse is a home rental system unique to South Korea in which tenants pay a large sum of money as a deposit instead of paying monthly fees.

Kim is one of many Koreans who buy lottery tickets in the hopes of home ownership, a symbol of middle-class financial security, as the runaway property prices have made it hard for an ordinary household to buy a place in the capital city with only their savings.

The government has tightened lending rules to rein in the soaring real estate prices amid the ballooning household debt in Asia's fourth-largest economy. 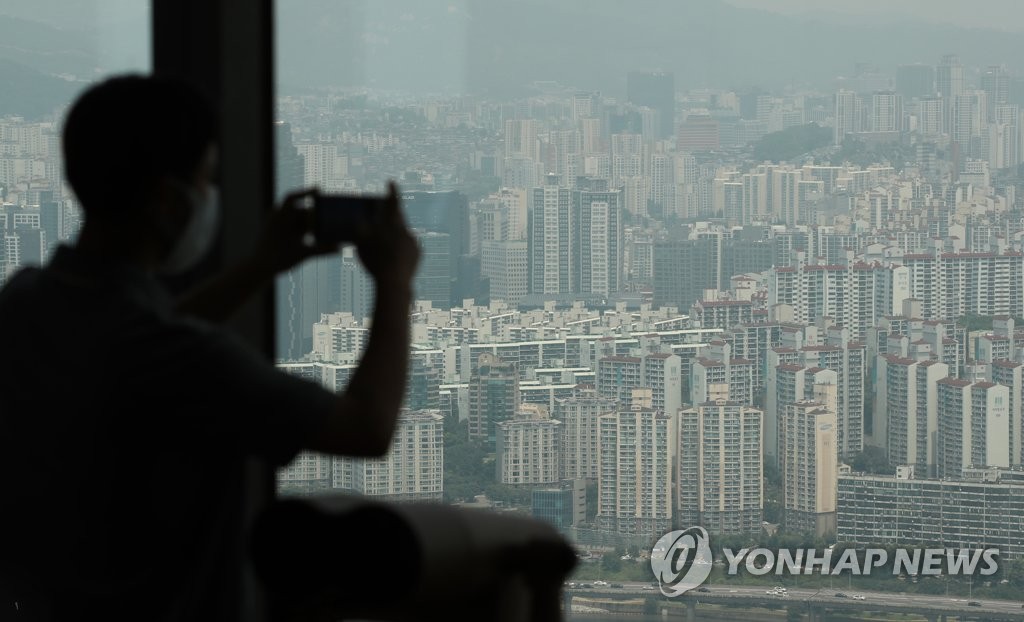 The average first prize of the weekly lottery was 2.1 billion won (US$1.87 million) last year, according to the lottery committee under the finance ministry, which boils down to 1.4 billion won after a 33 percent tax deduction.

The actual amount of the prize was a little higher than the average trading price of Seoul apartments, which surpassed 1.1 billion won in April, according to KB Kookmin Bank's real estate data.

It may not be even enough to buy an apartment in the affluent Gangnam and Seocho areas, where a typical three-room flat easily goes for over 2 billion won.

Knowing there is only a slim chance of winning the lottery, Kim applied for another type of jackpot whose payout is estimated at over 1 billion won: the right to buy a new apartment located on the bank of the Han River, one of the most expensive residential areas in the nation.

The 35-story apartment complex named Raemian One Bailey is currently under construction by Samsung C&T Corp., Samsung Group's construction arm, which will be completed in late 2023.

In South Korea, those who have designated bank accounts can apply for new apartment subscriptions two or three years before their construction is completed. Those who win the right to buy the apartments should pay the money upfront, interim down payments and the remainder in phases to finalize the contract.

Kim said he applied for a 59-square-meter three-room flat priced around 1.4 billion won, one of 224 units up for presale subscriptions out of nearly 3,000 households. The rest of the units were already allocated to those who previously owned old apartments on the site.

The sales price per square meter was set at the highest-ever level for a new apartment in the nation, but it was oversubscribed by 161.1 times on the first day of subscription Thursday, according to Samsung C&T.

Several of the nation's mainstream media introduced the new apartment as "1 billion lotto," based on calculations of the price gap between them and nearby units, although potential buyers can only reap profits after the restrictions for the resell period end 10 years later.

"The odds of winning a lottery and the right to buy the apartment are similar for me in that they are both near zero," Kim said.

And he has a good reason to believe he has almost no chance of getting it.

The current subscription system revised in 2017 favors those who have more supporting family members and spent more time without owning a home. Apartments priced over 900 million won are banned from bank loans, a threshold set below the average prices of midsized apartments in the city.

As a result, those in their 50s and 60s with ample cash had a higher chance in the previous subscriptions for new apartments, edging out younger non-home owners amid the housing crunch.

Market watchers say the fierce competition to win the right to buy a new apartment underscores the high expectations for a continued real estate rally and desire to climb up the property ladder.

"The preferences for new homes and concerns over a supply shortage seem to have led to the heated competition for new apartments," said Yeo Kyeong-hee, a researcher at Real Estate 114, an online real estate data provider. "Expectations for high profits and rising housing prices are also behind the fervor."

The competition has intensified since the Moon Jae-in administration tightened regulations on redevelopment projects and reintroduced the price ceiling on new apartments to tame the real estate market.

The average subscription rate for new Seoul apartments stood at 94.1 to 1 between May 2020 and April 2021, over six times more than that in the first year of the Moon administration that took office in May 2017, according to data by the Korea Real Estate Board.

To pass through the narrow door, some people even fabricated documents or falsely registered family members to earn a higher score in the subscription system.

On Monday, the Gyeonggi Provincial Office said it has discovered 176 people who falsely won the right to buy new apartments in Gwacheon, south of Seoul, which was also dubbed "1 billion lotto." The office vowed to expand the probe into other areas where the competition rate was high to crack down on violators.

Some criticized the current system for benefiting only a handful of deep-pocketed people, urging the government to lower redevelopment regulations and loans to help ease the supply shortage and make properties more affordable to would-be first-time buyers.

"Sales of new apartments at lower-than-market prices do not help stabilize the real estate market amid skyrocketing housing prices," Gyeonggi Province Gov. Lee Jae-myong said last month. "Many people wander around the nation in search of lotto apartments instead of focusing on their work, which can ruin the country."

In a detour from tight regulations to increased supply, the land ministry has set a goal of increasing the number of new homes by up to 836,000 nationwide in the next four years by relaxing building regulations and support public redevelopment projects in urban areas.

The ministry's plan, however, has a stumbling block after the state-run Korea Land & Housing Corp. was mired in a property speculation scandal involving dozens of its employees in February, which hurt public trust over public development projects.

To revive the momentum for the ambitious supply plan, the government and the ruling Democratic Party have been floating various ways to cool down the red-hot housing market in their desperate efforts in the runup to next year's presidential election.

"The government will prioritize the housing supply to ease uncertainties in the real estate market and curb speculative demand," Hong said during a real estate policy meeting. "We will continue to take measures to protect those in need of homes and punish speculators who disturb the market."