SEOUL, June 24 (Yonhap) -- This year's rainy season in South Korea is expected to begin in July, instead of late June as previously forecast, the state weather agency said Thursday.

The Korea Meteorological Administration (KMA) said that the onset of the nation's monsoon season will be delayed by a few weeks to next month due mainly to atmospheric stagnation in East Asia. The KMA had previously forecast this year's rainy season will start in late June. 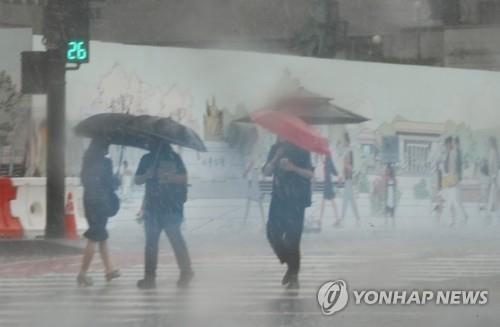 "High atmospheric pressure of the North Pacific, located far to the east of our country, has still not expanded and a stationary front formed in the south is unlikely to move north until early next week. Thus the start of the rainy season is likely to be delayed to July," the KMA said in its regular briefing.

The agency noted that the recent spate of rains and showers was not caused by the stationary front and thus cannot be seen as part of the wet season.

"Low pressure has been located in the west of our country and an easterly wind has blown in the east. Rain showers have occurred in many inland areas where the two air fronts met," the KMA explained, adding recent showers are characterized by heavy precipitation and accompanied by hail, thunder and lightning.

It said the current atmospheric pressure will continue to dominate the peninsula prior to the rainy season, probably resulting in frequent rain showers of varying severity in inland areas.