The defense chief made the remark during a biannual meeting with top commanders to discuss the security situation on the Korean Peninsula and other defense issues, vowing to hand down a stern punishment to the accused brigadier general so as to give a warning to others.

The general is suspected of attempting to molest one of his subordinates after a dinner together. He was relieved of his duties Wednesday, hours after the victim reported the case to her unit, and was arrested Friday.

The incident took place as the military is grappling with how to stamp out sex crimes in barracks amid intense public fury over the suicide death of a female Air Force noncommissioned officer in May three months after suffering sexual abuse.

Former Air Force Chief of Staff Lee Seong-yong had to step down last month to take responsibility over the incident, and an extensive probe is still under way over allegations Air Force officials tried to cover up the case without giving proper help to the victim.

"I feel terribly ashamed and regret that the military's ability to reform itself is questioned due to a general's sexual harassment case at this critical time when we are gathering our will and efforts to meet the public's expectations," Suh said at the start of the meeting.

"I will give a stern punishment on this case as a warning to others. I will show that anyone who misbehaves to harm the military's discipline won't be able to avoid a severe punishment," he added. 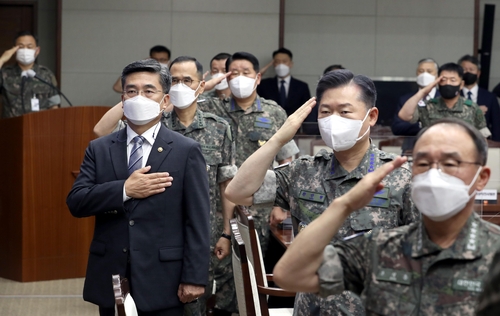 The meeting was attended by Joint Chiefs of Staff Chairman Gen. Won In-choul, as well as the chiefs of the Army, the Air Force and the Navy.

During the meeting, Suh also called for better responding to demands from younger-generation soldiers.

The military has recently come under fire for low quality meals and poor living conditions for soldiers, particularly for those in COVID-19 quarantine, following a series of complaints from service members.

"I believe that every one of our members will devote their efforts and passion so that the military can become a strong and trusted organization based on justice and human rights," the minister said.

The participants also assessed the security situation of North Korea and discussed ways to ensure a tight readiness posture, according to the ministry.

North Korea appears to have continued to advance its nuclear and conventional weapons, and maintains a posture to make provocations at any time, the ministry said in a release.

"We will continue to strengthen Korea-U.S. combined deterrence and response capabilities against North Korean nuclear and missile threats, and will conduct combined exercises and drills with the U.S. through diverse methods in the second half of this year," the ministry said.

The ministry also vowed efforts to expedite the transfer of the wartime operational control (OPCON) of Korean troops from Washington to Seoul. 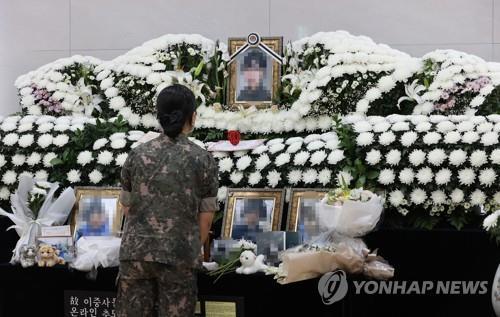