Lee, who also served as the chief of the ruling Democratic Party (DP), scored 43.7 percent compared to former Prosecutor General Yoon's 41.2 percent in the poll conducted by WinGKorea Consulting.

The result came as Yoon, a leading conservative candidate, is facing growing attacks from liberal rivals over a series of fraud cases involving his mother-in-law and alleged academic plagiarism by his wife. 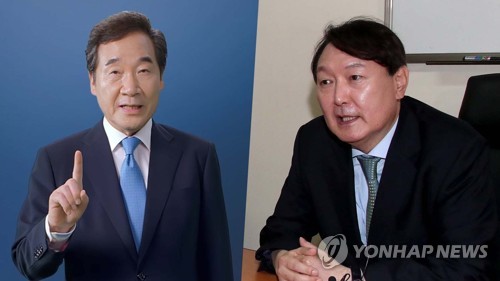 It is the first time that Lee has fared better than Yoon in a hypothetical two-way race, though their gap of 2.6 percentage points is within the poll's margin of error of 3.1 percentage points.

Pitted against Gyeonggi Province Gov. Lee Jae-myung of the DP, Yoon was slightly ahead with 42.2 percent to 41.5 percent.

Among all potential contenders, Yoon topped the poll with 26.4 percent and Gov. Lee ranked second with 25.8 percent. Lee Nak-yon came in third with 16.4 percent.

The survey was conducted over the weekend on 1,011 people aged 18 or older nationwide.
(END)