SEOUL, July 14 (Yonhap) -- The Air Force's chief legal affairs officer has been booked for investigation over allegations he failed to properly oversee an initial probe into sexual abuse of a female noncommissioned officer that led to the victim taking her own life, the defense ministry said Wednesday.

Brig. Gen. Jeon Ik-soo was booked on charges of dereliction of duty on Tuesday, and his status has been switched to that of a suspect, 42 days after the defense ministry launched an investigation into why the noncommissioned officer killed herself, according to officials.

The bereaved family has claimed that the poor initial probe into the sexual abuse case, which was overseen by Jeon, together with a lack of measures to protect the victim, caused their loved one to take her own life in May, about three months after she was abused.

"We questioned the chief of the office last week and confirmed some of the suspicions in connection with the poor probe by the Air Force. Accordingly, we decided to book him on Tuesday on dereliction of duty suspicions," the ministry said in a release.

Later in the day, Jeon underwent a four-hour interrogation by military prosecutors and returned at about 10:30 p.m., according to officials.

Following intense public criticism of the Air Force's mishandling of the case, the defense ministry took over the handling of the incident and launched an extensive probe last month.

The ministry added that prosecutors on Wednesday requested an arrest warrant for an official of the high military court on charges of revealing classified information on the case. Sources said he allegedly sent to Jeon text messages containing details of the ministry's ongoing probe into the case.

So far, military prosecutors have indicted at least 10 people and have been conducting investigation into a dozen others, including the key suspect and two of the victim's senior colleagues for allegedly forcing the victim to drop her complaint in a suspected attempt to cover up the incident. 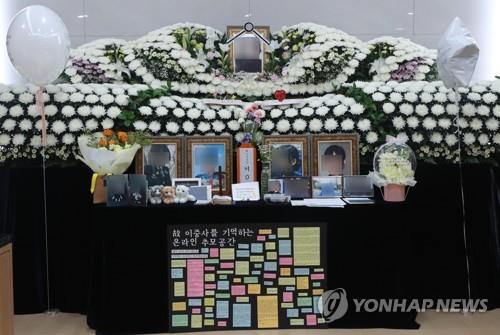