SEOUL, July 16 (Yonhap) -- About 10 minutes away from beating a team that some consider a medal contender at the Olympic men's football tournament this summer, South Korea completely fell apart.

South Korea fell to France 2-1 on Friday in their final tuneup before heading to Tokyo. Kwon Chang-hoon's 63rd-minute penalty put the hosts ahead at Seoul World Cup Stadium, but France scored twice in the final stretch to spoil the party. 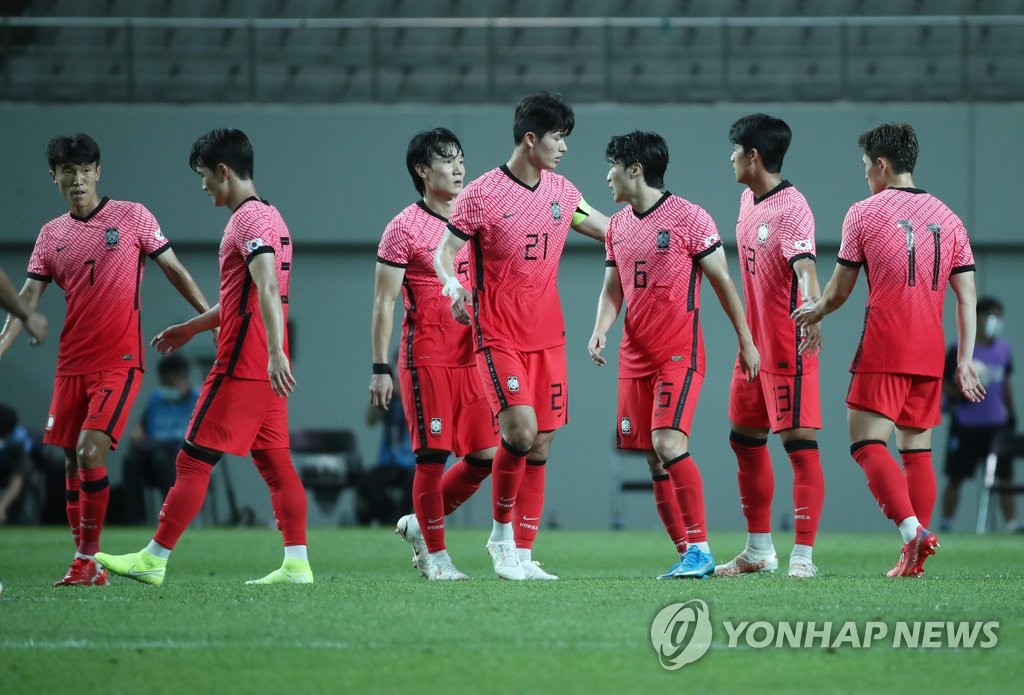 Head coach Kim Hak-bum's 22-man team will fly to Japan Saturday, with more questions than answers less than a week from their first group match.

After a scoreless first half Friday, South Korea began to assert themselves more offensively in the second half. It was Lee Dong-jun's determined effort on a fast break that drew the foul in the box and set up Kwon's successful penalty.

At the other end, minus their best defender Kim Min-jae, South Korea hung tough and gave much better effort in the second half than in the first, with solid coverage and gap control.

Earlier in the day, Kim was dropped from the squad, after his Chinese club, Beijing Guoan, refused to make him available for the Olympics. Releasing players for the competition is optional for teams, and despite South Korea's hopes, Beijing didn't budge.

Kim was badly missed in a 2-2 draw against Argentina. But on Friday, South Korea were on the verge of a gratifying, confidence-boosting victory without Kim, until other issues conspired to make the team snatch defeat from the jaws of victory. 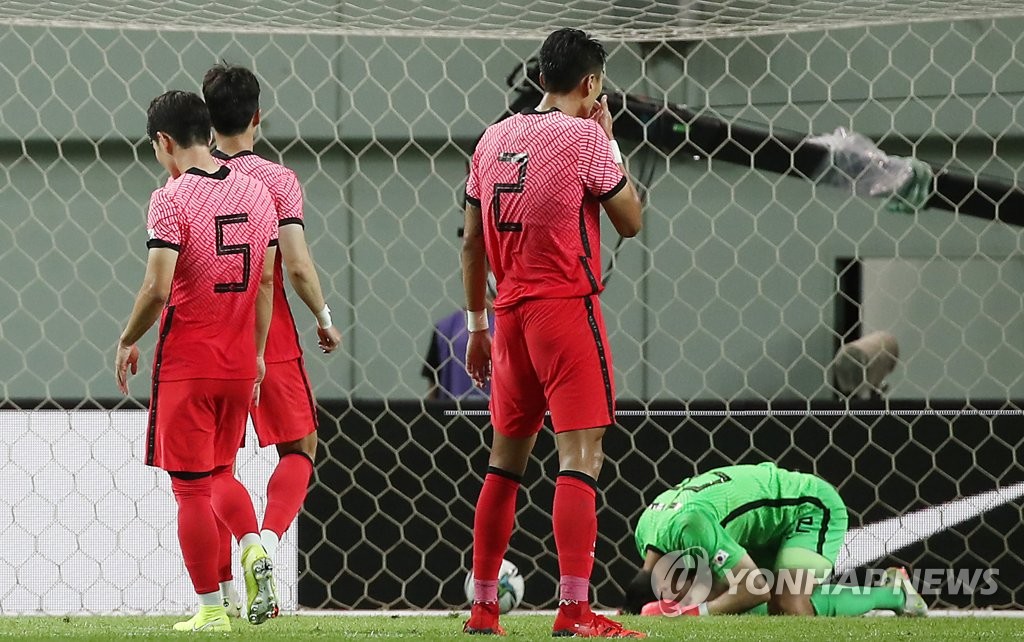 The French equalizer was the result of some deft passing play, with a long cross finding its way into the box and then a tic-tac-toe play being capped off by Randal Kolo Muani's score in the 83rd minute. Still, South Korea missed out on a chance to prevent that scoring play from happening in the first place.

Coach Kim attributed to the chaotic finish to multiple substitutions he made in the second half, with seven players coming off the bench and trying to fit into the rest of the lineup.

"I think our players lost a bit of focus toward the end, but I won't make so many changes during the Olympics," Kim said. "I wanted to get everyone into these two tuneup matches. I still think that we'll be able to post good results if we prepare well."

In the first half, South Korean defenders seemed to respect Florian Thauvin and Andre-Pierre Gignac too much, as the veteran French attackers were often left untouched to fire shots.

Despite some obvious defensive issues exposed in the two matches this week, coach Kim said he wasn't overly concerned.

"I think some of those (defensive) miscues came from momentary lapses of judgment," Kim said. "Obviously, we can't afford those in Olympic matches. But I think our defensive cohesion will improve as we play more matches."

The go-ahead goal by Nathanael Mbuku in the 89th minute should have been prevented. Goalkeeper Song Bum-keun, usually a trusted netminder who should be the team's No. 1 man in Tokyo, let the shot fired right at him go through the five-hole. 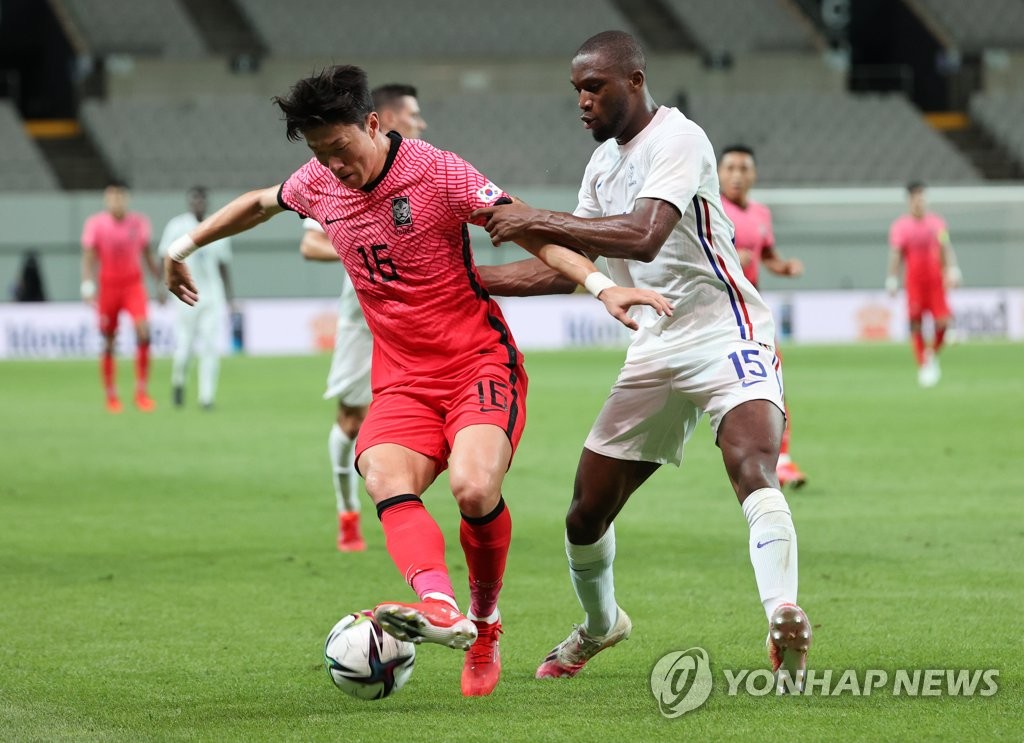 Asked about the miscue, coach Kim could only shake his head while giving a wry smile.

"I am sure it was a big wakeup call. I think he was in too much of a hurry to make a play," the coach said. "But for mistakes like that, one is enough."

Kim said getting a 2-2 draw against Argentina was a confidence boost for his young players, but they need even more self-assuredness if they were to contend for a medal in Tokyo.

"I still saw plays where the guys became too passive and timid," Kim said. "We need to change that. And we also need to play with more speed. Things won't be easy if we can't run with the best of them at the Olympics."

Kwon, the lone Korean goal scorer, said he hated losing Friday, even if it was just an exhibition match.

"We can't get used to losing, but we know we all gave our best out there tonight," he said. "I am not satisfied with the way I played. I am going to have to think long and hard about how I can improve."

Hwang Ui-jo, the veteran striker chosen as an overage player for the under-24 team, said he wanted to see better communication among offensive players.

"We have to pay attention to small details when we're trying to create scoring chances," Hwang said. "I think we've identified our problems over these two matches. We'll try to fix them the best we can." 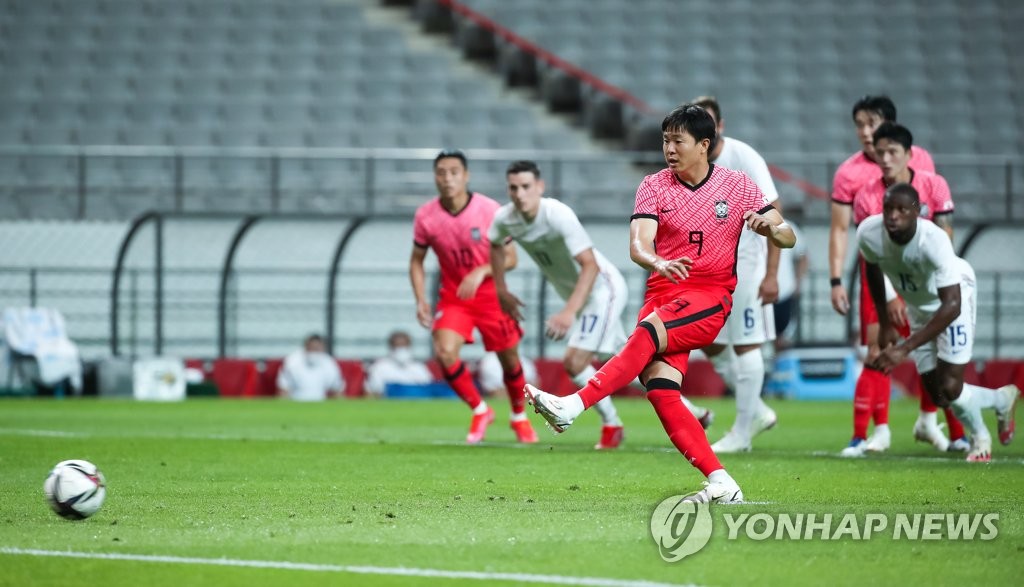