(ATTN: UPDATES with results of new poll in last 5 paras)

SEOUL, July 19 (Yonhap) -- Former Prosecutor General Yoon Seok-youl maintained his lead among prospective contenders for next year's presidential race, while Lee Nak-yon, a former chairman of the ruling Democratic Party (DP), gained ground against his bigger rivals, according to a poll released Monday.

According to the poll of 1,013 voters nationwide conducted by the Korea Society Opinion Institute (KSOI) on Friday-Saturday, Yoon, the leading candidate from the opposition bloc, managed to stay on top with 30.3 percent support, up 0.4 percentage point from a week earlier.

Gyeonggi Province Gov. Lee Jae-myung, affiliated with the DP, ranked second with 25.4 percent, down 1.5 percentage points over the same period.

Rep. Lee came in third, with a 1.2 percentage-point uptick in his popularity to 19.3 percent.

The former DP leader was a leading presidential hopeful up until about a year ago, but his favorability gradually fell alongside a drop in the DP's popularity rating.

However, his popularity has displayed an upward trajectory for three straight weeks in July, reducing the gap with runner-up Lee Jae-myung to 6.1 percentage points, according to the Seoul-based pollster's surveys.

The two had a gap of 16.9 percentage points in the KSOI's survey conducted during the fourth week of June, with the Gyeonggi governor at 28.4 percent and the former DP head at 11.5 percent. 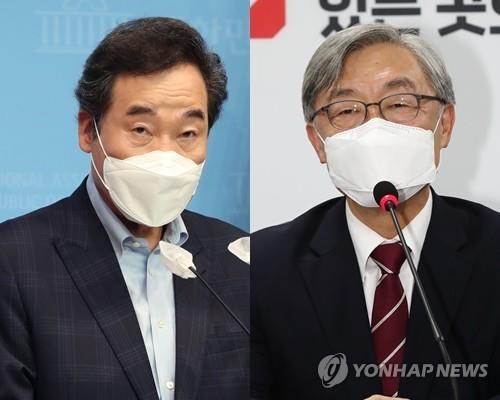 In the survey, Choe Jae-hyeong, the former chairman of the Board of Audit and Inspection, jumped three notches to fourth place, garnering support from 5.6 percent of respondents, up 3.1 percentage points from the previous week.

The poll has a margin of error of plus or minus 3.1 percentage points at a 95 percent confidence level.

A separate poll announced later in the day showed the two leading DP candidates ahead of Yoon in their respective hypothetical matchups.

Among all potential contenders, Gov. Lee topped the poll with 27.1 percent. Yoon ranked second with 19.7 percent and Lee Nak-yon came in third with 14.6 percent.

The survey was conducted over the weekend on 1,015 people aged 18 or older nationwide. It has a margin of error of 3.1 percentage points.