SEOUL, July 20 (Yonhap) -- The amount of securities settlements in the South Korean financial market soared nearly 19 percent in the first half of the year from six months earlier, industry data showed Tuesday.

Stocks and bonds worth 3,772.2 trillion won (US$3.28 trillion) were delivered through the Korea Securities Depository (KSD) in the January-June period, up 18.6 percent from the second half of last year, according to data from the KSD.

It was also up 10.3 percent from a year earlier and marked the largest-ever half-year amount.

The daily amount of securities settlements averaged 30.67 trillion won in the six-month period.

The amount of stock and bond settlements registered record highs in the first half.

Stocks worth 280.3 trillion won were settled in the first half, up 39.5 percent from a year earlier and 30 percent from the last half, with the daily average spiking about 40 percent on-year to 2.28 trillion won.

The amount of bond settlements rose 9 percent on-year to 3,492.4 trillion won. It was up 17.8 percent from six months earlier, and the daily average came to 28.39 trillion won, according to the data. 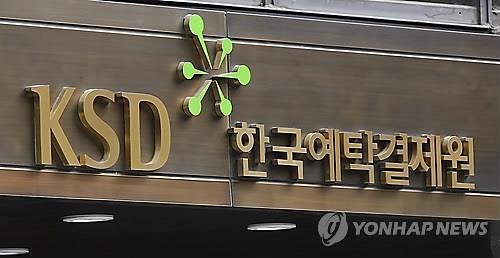