SEOUL, July 21 (Yonhap) -- Two Army officers and an enlisted soldier have tested positive for the new coronavirus, the defense ministry said Wednesday, the latest in a series of COVID-19 infections among the military population.

The officers, stationed in the northern city of Yangju and the eastern port city of Samcheok, respectively, were confirmed to have been infected after their family members tested positive earlier, according to the ministry.

The soldier in Seoul contracted the virus while on vacation, it added.

The latest cases raised the total number of infections reported among the military population to 1,203.

The figure does not include 266 confirmed cases from the 301-strong Cheonghae unit. The sailors on an anti-piracy mission in waters off Africa returned home Tuesday following the mass outbreak. Of them, 23 tested negative, and 12 others are awaiting test results.

Meanwhile, 58,155 troops aged 30 and older, or 49.7 percent of the age group, had received their second doses of the coronavirus vaccine as of Tuesday, according to the ministry. 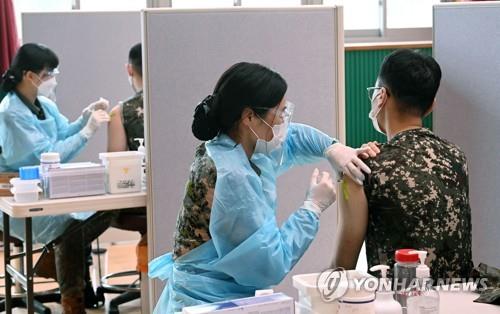