The two shared the understanding when Sherman paid a courtesy call on Chung in Seoul earlier in the day. Sherman arrived here Wednesday from Japan, where she had trilateral talks with her South Korean and Japanese counterparts, Choi Jong-kun and Takeo Mori, respectively.

"Minister Chung and Deputy Secretary Sherman reaffirmed the goal of achieving the complete denuclearization and permanent peace on the Korean Peninsula, which was affirmed by the leaders of the two leaders at the time of the Korea-U.S. summit," the ministry said in a release.

"While sharing an understanding that diplomacy and dialogue are essential in achieving the goal, (the two sides) also agreed to continue close cooperation at every level to bring North Korea to the dialogue table," it said. 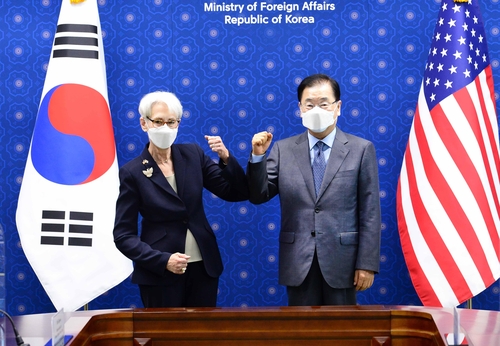 During the meeting, Sherman also told Chung that the United States greatly values the development of the South Korea-U.S. alliance, a linchpin of the peace, stability and prosperity in Northeast Asia and the Indo-Pacific, and her trip to Seoul came in that regard, according to the ministry.

Chung asked Sherman to make efforts to implement the follow-up measures to the outcomes of the May 21 summit between Presidents Moon Jae-in and Joe Biden, which cover cooperation in economic, global and other issues.

Later in the day, Sherman met with Unification Minister Lee In-young and expressed support for cross-border dialogue and cooperation with North Korea.

"Deputy Secretary Sherman said that the ministry's role is more important than anything else for peace and stability on the Korean Peninsula, while voicing U.S. support for inter-Korean dialogue and cooperation" the ministry said.

In a separate meeting with Vice Unification Minister Choi Young-jun, Sherman also agreed to continue such bilateral communications and cooperation with the ministry on peninsula issues. 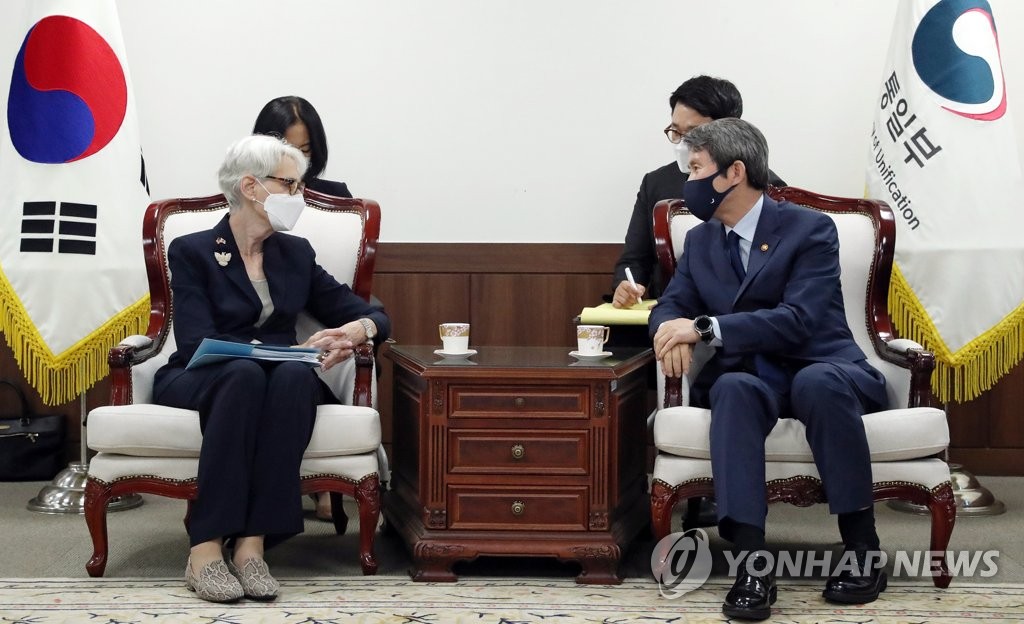 Sherman's Asia swing comes as Washington pushes to reinforce cooperation with its allies and partner countries amid an intensifying rivalry with China over technological leadership, maritime security and trade.

The trilateral talks in Tokyo highlighted three-way cooperation among the U.S. and its two Asian allies against a recalcitrant North Korea and an assertive China.

On Friday, Sherman and her South Korean counterpart, Choi, will hold a bilateral strategic dialogue on a wide range of issues, likely including strengthening supply chains for chips and large-capacity batteries.

Sherman is set to depart for Mongolia on Friday. She also plans to visit China and Oman later.