SEOUL, July 22 (Yonhap) -- The defense ministry on Thursday began an inspection into the mass coronavirus outbreak at the country's anti-piracy Cheonghae unit that infected 90 percent of its 301 members, forcing them to cut short their mission in waters off Africa and return home, officials said.

The ministry's inspector office will look into whether the military -- including the Joint Chiefs of Staff, the Navy, the Armed Forces Medical Command and the Cheonghae unit -- properly responded to the COVID-19 outbreak on the unit's 4,400-ton destroyer, Munmu the Great, according to officials.

The military has come under criticism for its poor initial response to the outbreak and for not actively seeking ways to inoculate the sailors. None of the 34th contingent of the Cheonghae unit had been vaccinated, as they left South Korea in early February, weeks before the country began the vaccination campaign.

The Cheonghae unit first reported six virus cases last week, and subsequent tests on all the crew members confirmed a total of 271 infections.

All of the 301 members were airlifted home Tuesday, and sent to military hospitals and treatment centers for quarantine.

Vice Defense Minister Park Jae-min said Wednesday the mass infection appears to have begun after the destroyer made a call at a nearby African port to load supplies from June 28-July 1.

One day after the vessel left the port, an officer first showed symptoms of a cold, but he was given only cold medicine.

Park said an investigation was necessary to find out the exact route of infection, as all the service members were wearing protective gear when they loaded the supplies.

The audit team is also expected to look into how the mass outbreak began, though the probe will have to largely rely on the sailors' testimony.

The virus-hit destroyer is scheduled to arrive in South Korea around September, and the vessel has been disinfected for a new team of sailors to pilot it back home.

On Thursday, the ministry said one sailor who previously tested negative was found to have contracted the virus, raising the total caseload among the Cheonghae unit to 271.

Of them, 17, including one showing severe symptoms, are at hospitals, while the rest are at treatment centers. Thirty members who tested negative have also been put in isolation at the military's quarantine facility, the ministry said. 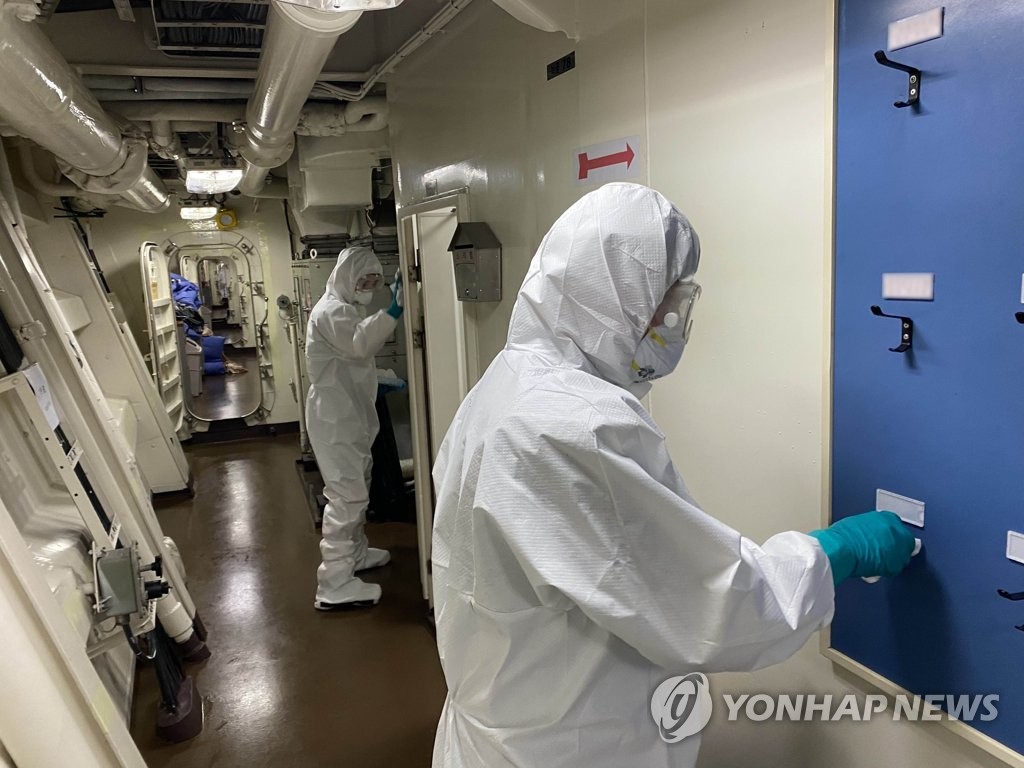