KASHIMA, Japan, July 22 (Yonhap) -- Undone by an unlucky bounce and lack of clinical finish, South Korea lost to New Zealand 1-0 to kick off the men's football tournament at the Tokyo Olympics on Thursday.

Burnley striker Chris Wood potted the match's lone goal in the second half after a shot attempt went off a defender's leg and landed on his feet, following a long stretch of South Korea's ball dominance at Ibaraki Kashima Stadium in Kashima, northeast of Tokyo, 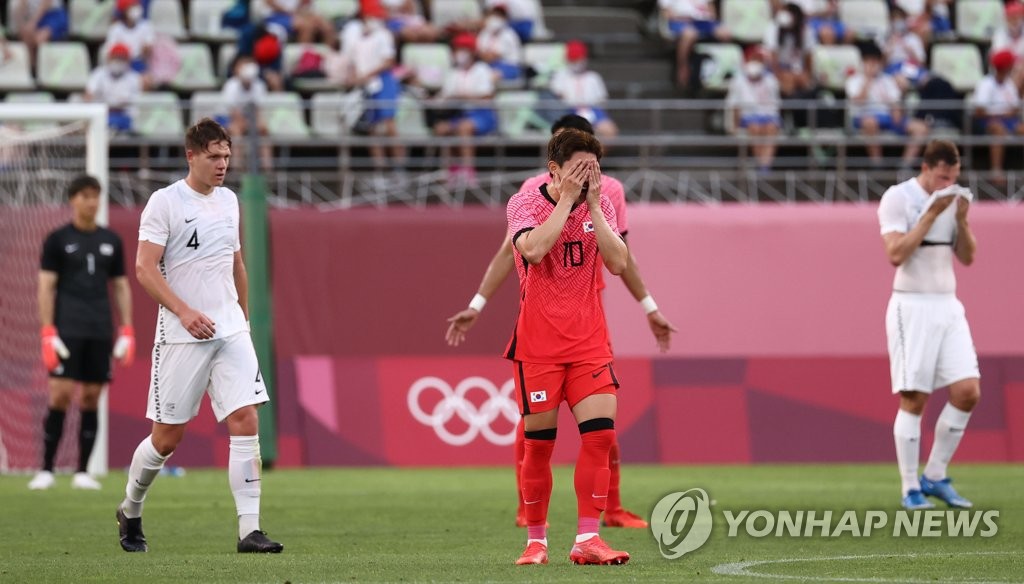 The loss put South Korea in an early hole in their bid for a second Olympic football medal. They will next face Romania on Sunday in a virtual must-win match, and then Honduras next Wednesday. The top two teams from the group will reach the quarterfinals.

South Korea dominated the run of play in the first half and did everything but score. Kwon Chang-hoon, one of three overage players for South Korea, missed out on a pair of open looks from point-blank range, with both opportunities set up by fullback Kang Yoon-seong.

In the 22nd, Kwon trapped a cross from Kang with his chest but fanned on a volley attempt. Some 20 minutes later, Kang found Kwon for another volley opportunity. Kwon connected with the ball but shot it high and wide.

Hwang Ui-jo nearly headed home South Korea's first goal in the 41st, following a perfect cross from Um Won-sang, but goalkeeper Michael Woud went down to meet the challenge and keep it scoreless. New Zealand failed to record a shot in the first half. Their defenders looked flustered against early South Korean pressure and had trouble getting the ball out of their own zone. South Korean wingers and fullbacks had their ways in the attacking zone, though the major advantage in ball possession didn't lead to a goal.

With South Korea unable to build on the momentum from the first half, coach Kim Hak-bum made three simultaneous substitutions just before the hour mark. Speedy attackers Lee Dong-gyeong, Lee Dong-jun and Song Min-kyu came on, hoping to inject some energy into a match that had turned stale.

The move nearly paid off in the 67th minute, when Lee Dong-jun set up Lee Dong-gyeong for a shot that was kicked aside by defender Winston Reid near the goal line. 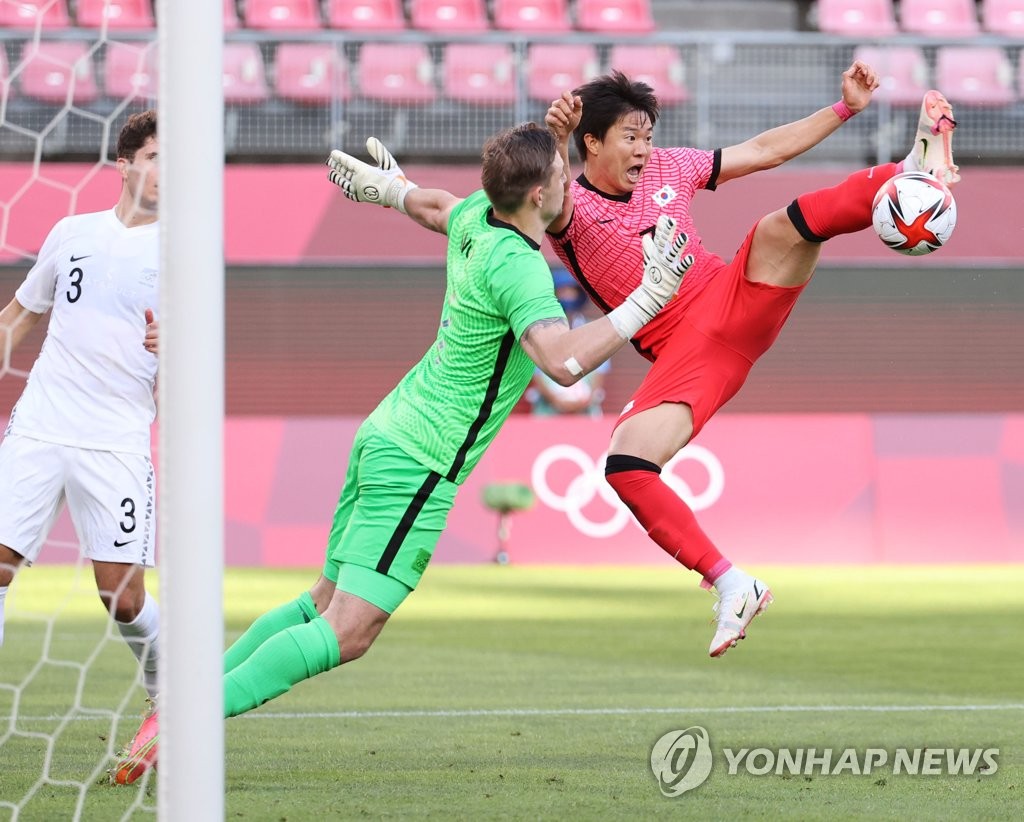 New Zealand then scored on their first shot on goal in the 70th minute. After Joe Bell's shot ricocheted off the leg of centerback Jeong Tae-wook, the ball found unmarked Wood, who poked it past goalkeeper Song Bum-keun.

The goal was initially called off by an offside ruling, but it was overturned upon video review. Wood was behind the line of defense when he scored, but he was in legal position when Bell took his initial shot. He wasn't ultimately ruled offside because the ball hit a South Korean player first before getting to Wood.

South Korea continued to press but their 12 shot attempts yielded nothing.

A few hundred students from a nearby public school attended the match. Kashima isn't under the same state of emergency that affects Tokyo, and can admit spectators on a limited basis, while events in the capital will be held without fans. 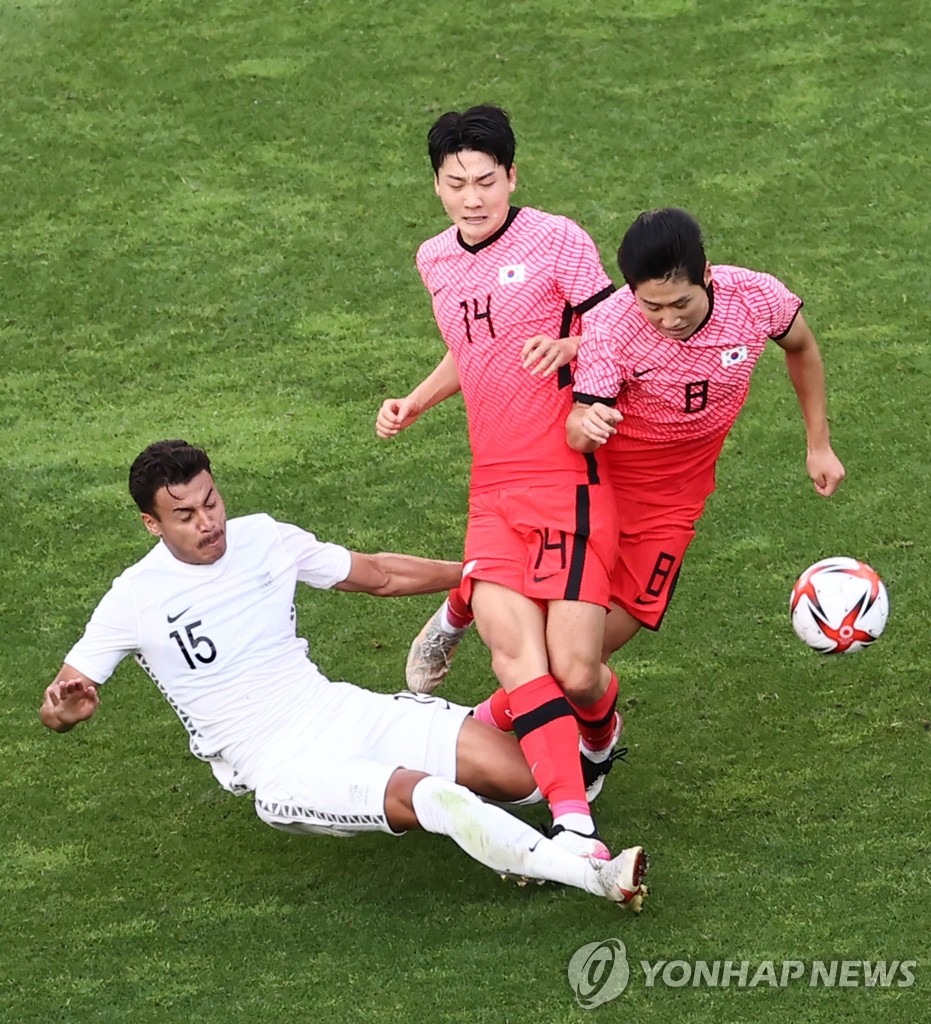