The group will perform its first Billboard Hot 100 chart topper "Dynamite," its latest hit song "Permission to Dance" and a special cover of "I'll Be Missing You" by Puff Daddy and Faith Evans on the British radio show next Tuesday (local time), Big Hit Music said.

"Live Lounge" on BBC Radio 1 is known for its segment featuring artists performing their own work along with covers of other songs. Global acts such as Foo Fighters, Alicia Keys, Harry Styles and Taylor Swift have appeared on the program in the past.

The seven-piece band will also have a virtual interview with presenter Adele Roberts, who interviewed the group in South Korea back in 2018.

The following day, BBC One, one of Britain's major TV channels, will air a separate BTS special documentary, which will focus on the culture and industry of K-pop that led to the creation of one of the world's biggest pop bands, according to the network.

The documentary will feature footage of BTS' performances on "Live Lounge." 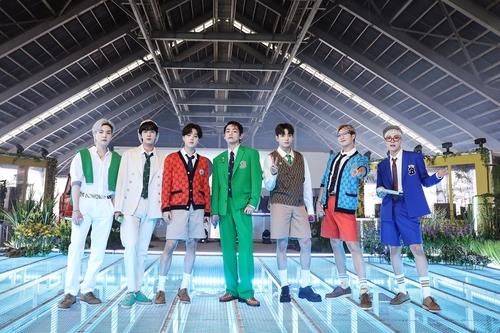