Power has been cut off at 50 homes in a 100-unit apartment complex in Uiwang, Gyeonggi Province, since 9 p.m. the previous night, causing concerns about health problems and other effects of heat. In Hanam, just southeast of Seoul, 45 houses were unable to use power for two hours from 10:17 p.m. 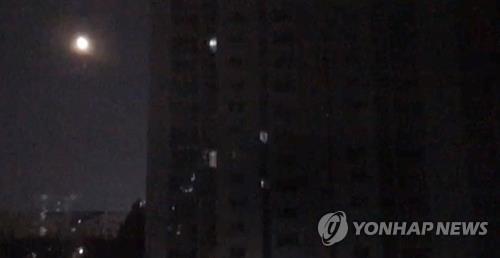 Similar incidents were reported in other parts of the country.

In Gwangju, 330 kilometers south of Seoul, 429 homes lost power at around 10 p.m., as demand for electricity surged amid unrelenting heat even at night. Two residents were rescued by firefighters after being stuck in an elevator. Power was restored at 6 a.m. Friday.

The heat waves are forecast to continue nationwide, and temperatures will not dip much at night, according to the Korea Meteorological Administration (KMA), giving rise to concerns about various health-related issues and possibly bigger power failures.

The lowest nighttime temperature was 27.2 C in the capital Seoul and Incheon. It was 26.5 in Suwon, 26.1 in Cheongju and 25.8 in Mokpo, a port city in southwestern Korea. Thermometers did not dip below 25 C in most of the country.

The country's highest daily temperature hit 40.2 C on Thursday, which was measured by an automatic weather station (AWS) in Dongducheon, north of Seoul. But data recorded by the system is not considered as official statistics.

Korea Electric Power Corp. (KEPCO) warned of more power outages, given the continuation of extremely warm weather conditions and a surge in electricity demand, and asked people to make necessary repairs to prevent a bigger outage.

The KMA said hot and sunny days will continue for days to come, with daily highs reaching around 35 C and even 38 C in some western inland cities.