The proposal was made Thursday via the hotline restored Tuesday after nearly 14 months of suspension, and the North received a document containing the South's offer, he said.

"Yesterday, we proposed discussing the issue of setting up the system for virtual talks through our liaison office and the North has received a document of our proposal," Lee told reporters during a press conference in Seoul.

"We hope North Korea will respond positively to our proposal so that we can set up a virtual conference system at an early date," he said.

Lee said the government will try to complete setting up the system for virtual talks or "safe in-person talks" as soon as possible to move the stalled talks forward amid the global coronavirus pandemic.

Lee stressed that the ministry has already prepared antivirus measures to ensure that the two Koreas hold cross-border talks free from coronavirus concerns.

He also said the ministry has resumed approving requests from civilian organizations to provide assistance to Pyongyang, starting with two in the afternoon, after a 10-month hiatus since the North's killing of a South Korean fisheries official near the inter-Korean sea border in September last year.

"The decision was made considering the consistent requests from civilian organizations for humanitarian assistance and the North's situation, especially on the urgency of assistance related to public health and nutrition," Lee said.

A high-ranking ministry official later explained that the ministry has detected signs that the border between the North and China has opened up via sea and "has a possibility of opening via land."

On Tuesday, four hotlines were restored nearly 14 months after the North cut them off in June last year in protest of anti-Pyongyang propaganda leaflets coming in from the South.

The official said the North's decision to reconnect the severed communication lines is reflective of the trust between President Moon Jae-in and North Korean leader Kim Jong-un.

The official said the North could have positively assessed the recent summit meeting between Moon and U.S. President Joe Biden and their policy direction toward the North.

He said the restoration is believed to be part of the North's "steps to take minimum measures in inter-Korean relations to move U.S.-North Korea relations forward."

The ministry is currently drafting a list of nearly 30 agenda items to discuss with the North when inter-Korean talks resume, including assisting the North with coronavirus vaccines and the North's explosion of the liaison office, the official said. 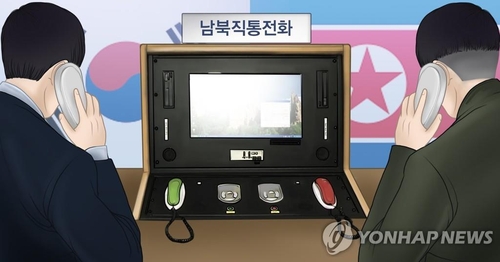