"(The restoration) was what Chairman Kim Jong-un requested," the National Intelligence Service (NIS) was quoted by Kim Byung-kee and Ha Tae-keung, senior members of the parliamentary intelligence committee, as saying during a parliamentary briefing.

A week earlier, Cheong Wa Dae announced that the two Koreas reopened direct cross-border liaison hotlines and were resuming inter-Korean communications. The liaison hotlines were disconnected by the North about 13 months ago in protest of propaganda leaflets coming in from the South.

"Through the (reconnected) communication lines, South and North Korea are regularly talking on the phone twice every day," the NIS was quoted as saying during the briefing.

"Since April, the two leaders, through two rounds of letter exchanges, have expressed commitment to recovering trust and improving relations between the two Koreas," the NIS also said of the background of the recent decision to resume inter-Korean communication.

The resumption also reflects the North's "expectations for our government to play a role in reviving North Korea-U.S. relations in the future," according to the spy agency.

The North is currently demanding permission to export minerals, and import refined oil and other living essentials as prerequisites for reviving dialogue with Washington, it said.

A unification ministry official, however, said that the decision to reopen the communication lines was based on consultation and agreement between the two Koreas.

"The communication lines were restored not at the request of the North but as the result of sufficient consultation and agreement between the two Koreas," the official told Yonhap News Agency on condition of anonymity.

The spy agency also said a recent warning by the North against joint South Korea-U.S. military drills may indicate the country's willingness to advance inter-Korean ties in return for a halt to the joint military exercises.

"(NIS) assesses that the North displayed its intention to take corresponding measures regarding inter-Korean relations if South Korea and the U.S. suspend their joint military drills," according to the spy agency.

Issuing a statement Sunday, Kim Yo-jong, the powerful sister of leader Kim, warned that annual summertime military drills between Seoul and Washington will cloud the future of inter-Korean relations.

South Korea and the U.S. are expected to hold their annual summertime joint military exercise later this month, though Seoul's defense ministry earlier said when and how to stage the exercise have not been decided yet.

Adding to the analysis, NIS Director Park Jie-won said the government needs to review ways to "flexibly" handle the joint exercise for the sake of the broader cause of denuclearizing the North, effectively suggesting the suspension of the annual drills.

The spy agency also brushed off speculation about Kim's health, raised over a recent photo showing medical plaster on the back of his head, saying, "We assess there are no signs indicating ill health."

The communist country's trade volume with China came to US$65.75 million in the first half of this year, down 84 percent from a year earlier as the country operated its industrial facilities at 25 percent capacity last year due to suspended coal exports and a shortage of raw materials, it added. 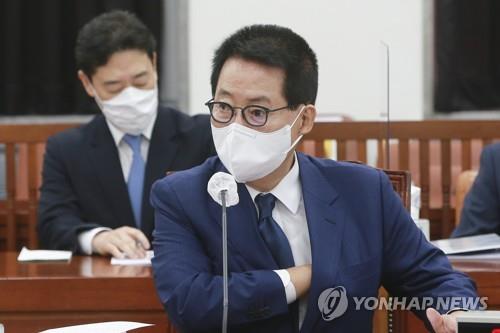