SEOUL, Sept. 2 (Yonhap) -- South Korea's unionized health workers called off their planned strike Thursday, hours before the unionized workers were set to go on a nationwide strike amid the pandemic.

The Korean Health and Medical Workers' Union (KHMU), representing more than 56,000 nurses, pharmacists and other health care professionals, said it reached an agreement with the government in their last-ditch talks held the day before.

The decision to call off the planned strike came after midnight as union members took time to discuss the tentative agreement with the government, which focuses on improving their working conditions.

The sides were said to have agreed on the need to avoid any vacuum in medical services amid the COVID-19 pandemic. 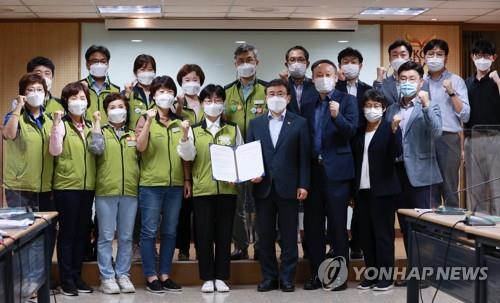 Under the agreement, the government will come up with detailed measures by October on how to schedule working hours of nurses based on the severity of patients.

A growing number of nurses in public health clinics have quit or taken temporary leave since last year due to cumulative fatigue and mental stress amid the prolonged pandemic.

Also, the government will enforce overtime benefits to front-line nurses and health care workers starting in January, as they have suffered from burnout due to a chronic workforce shortage.

The KHMU represents a total of 56,091 nurses, medical engineers, nursing aides and other health workers at hospitals and medical clinics nationwide. The union excludes doctors.

Around 30 percent of KHMU members were expected to take part in the walkout if held, according to KHMU.