SEOUL, Sept. 13 (Yonhap) -- Flights and ferry services were cancelled on the southern island of Jeju on Monday due to heavy rain and strong winds, as Typhoon Chanthu was moving up in waters off Shanghai, China, the state weather agency said.

The 14th typhoon of the year was located 200 kilometers southeast of Shanghai as of 3 p.m., travelling north-northwest at a speed of 25 kph, the Korea Meteorological Administration (KMA) said. It had a maximum wind speed of 39 meters per second.

Authorities issued heavy rain and strong wind alerts for Jeju as the island received rainfall ranging from 8 mm to 39 mm as of 5:30 p.m. with the Mount Halla area recording 100 mm. 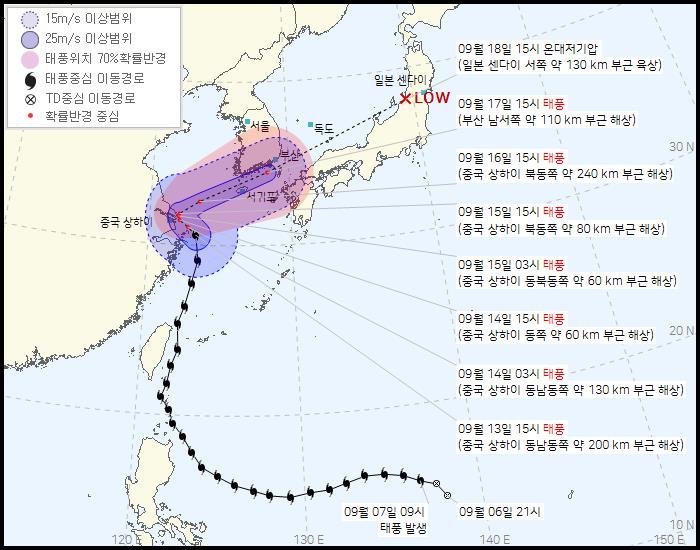 Jeju International Airport canceled eight flights due to the bad weather in the afternoon. Several ferry operations were suspended with high wave alerts issued for waters off the island.

Typhoon Chanthu will likely reach waters off Jeju Island and Korea's southern coast around Wednesday and Thursday, the agency said.

As the storm closes in on the Korean Peninsula, the rain is expected to affect southern parts of the country, including Jeju, Jeolla and Gyengsang regions, this week.

Precipitation levels could reach more than 500 mm in some parts of Jeju, 80 mm in South Jeolla Province and 40 mm in South Gyeongsang Province throughout Wednesday, according to the KMA.