SEOUL, Sept. 15 (Yonhap) -- The National Assembly on Wednesday approved the resignation of Rep. Lee Nak-yon of the ruling Democratic Party (DP), a week after he offered to step down as a lawmaker to focus on his bid for the presidency.

In a National Assembly plenary session, lawmakers passed the motion to relieve Lee in a 151-42 vote, with 16 abstentions. While the assembly is in session, a sitting legislator is required to win a majority approval from fellow lawmakers in a plenary meeting to step down.

The resignation brought down the total number of parliamentary seats held by the DP to 169, as opposed to the main opposition People Power Party's 104 seats.

The move will also leave the politically symbolic Jongno constituency in central Seoul vacant until the next by-elections in March.

Lee tendered his resignation a week ago, after Gyeonggi Province Gov. Lee Jae-myung of the same party won two consecutive landslide victories in the party's primary to pick its flag-bearer for the March 9 presidential election.

The departure appears to be a politically-choreographed move aimed at rallying his supporters ahead of the party's two back-to-back regional primary votes in North and South Jeolla Province, a key political support base for the liberal party, on Sept. 25 and 26.

Before the voting Wednesday, Lee again stressed his bid for the presidency in his parliamentary remarks at the plenary session.

"Standing face to face with the historic responsibility of (having to) reclaiming the presidency, I decided to throw the most important thing I have," Lee said.

"Above all, I am very sorry to residents of Jongno," he said in a shaky voice. 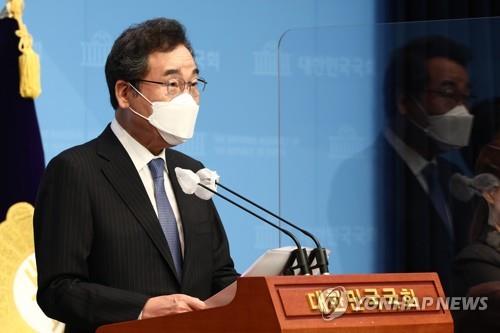