SEOUL, Sept. 15 (Yonhap) -- If art is a form of expression, then the paintings of Park Seo-bo, known as the father of Korean contemporary art, may not be art at all.

The octogenarian opened a new solo exhibition titled "PARK SEO-BO" at Seoul's Kukje Gallery on Wednesday, featuring 16 of his "dansaekhwa," the Korean monochrome paintings he has come to represent.

Speaking at a press conference at the gallery, Park said the purpose of his paintings is not to reveal or express, but to "empty myself." 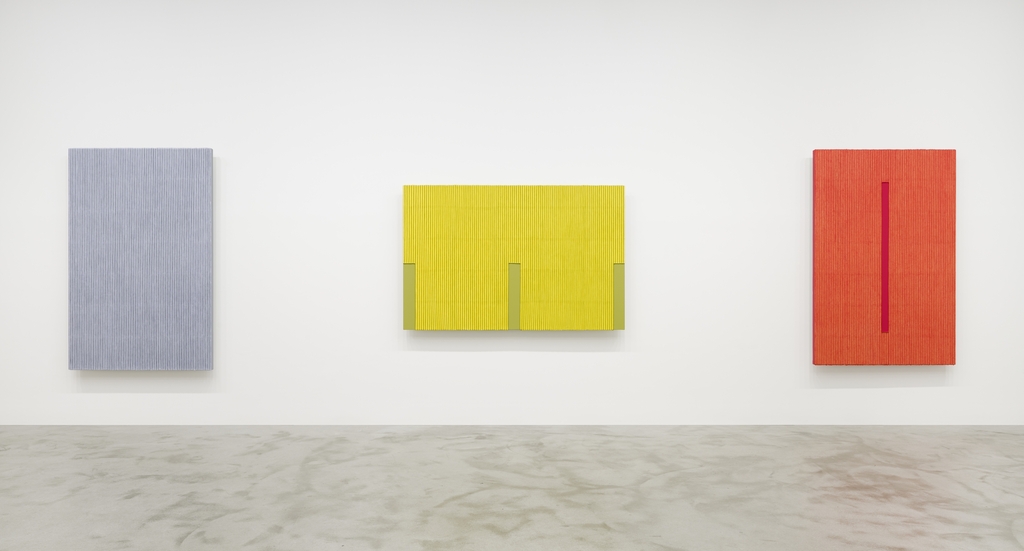 "In the 20th century, (artists) vomited everything they felt onto the canvass under the name of 'expression,'" said the painter who turns 90 in November.

"Then people would buy the paintings, hang them up on their walls and be assaulted by the images that (artists) have thrown up. That's not glorious, it's wrong, in this day and age," he said.

Park explained that he believes art should bring healing to people who are already under a lot of stress trying to keep up with the fast pace of an increasingly digitalized world.

"A painting should not hurl itself at the viewer, but like blotting paper absorb the person's anguish," he said. "By so doing, it should make the person feel at ease and happy." 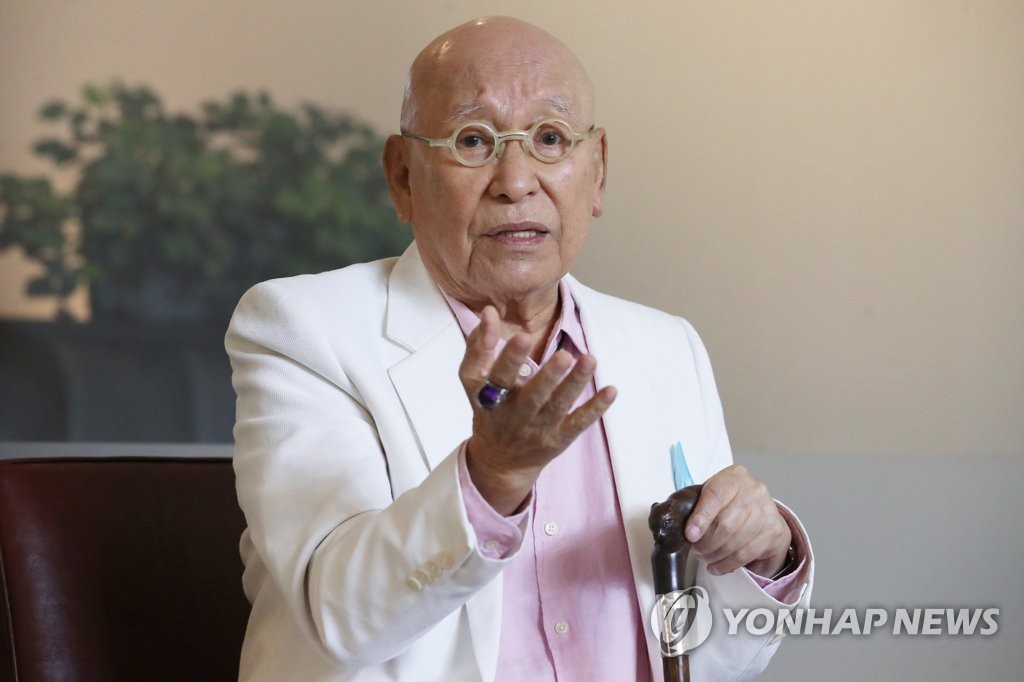 Park's latest exhibition features works from his late-Ecriture series, all of which were composed beginning in the 2000s using traditional Korean paper, "hanji," on canvas.

Unlike the white paintings of his early-Ecriture series, produced in the 1970s and 80s, the recent works are often a burst of intense and vivid colors ranging from neon green to a deep crimson red.

Other times, Park borrows softer hues, such as pale green, gray or faded tones of blue and purple from the nature he sees around him.

"Everything comes from nature, including colors," Park said. "The displays in show windows change every season and the colors you see in the latest fashion styles are all a secondary form of nature. And these are my teachers." 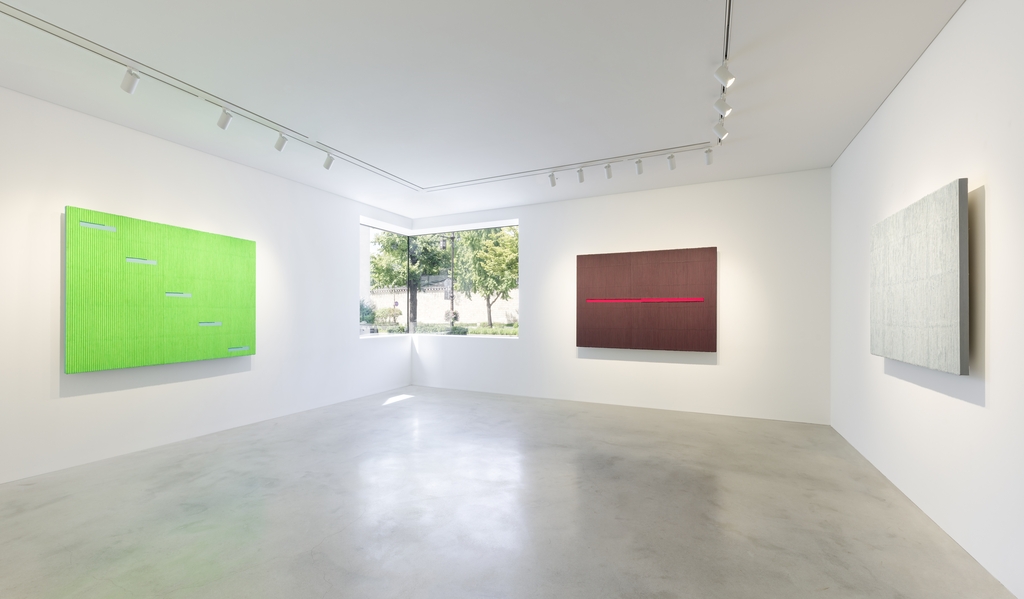 The six paintings showcased in the front gallery are color representations of air, cherry blossoms, canola flowers and wine, while the 10 paintings in the rear gallery evoke the colors of ripe persimmon, maple leaves and golden olives.

While his health has prevented him from doing projects that require a lot of body movement, Park said he still works five hours a day in front of an easel and plans to unveil his current project, which he started in 2019, at the Venice Biennale next year.

The exhibition at Kukje Gallery will run through Oct. 31. 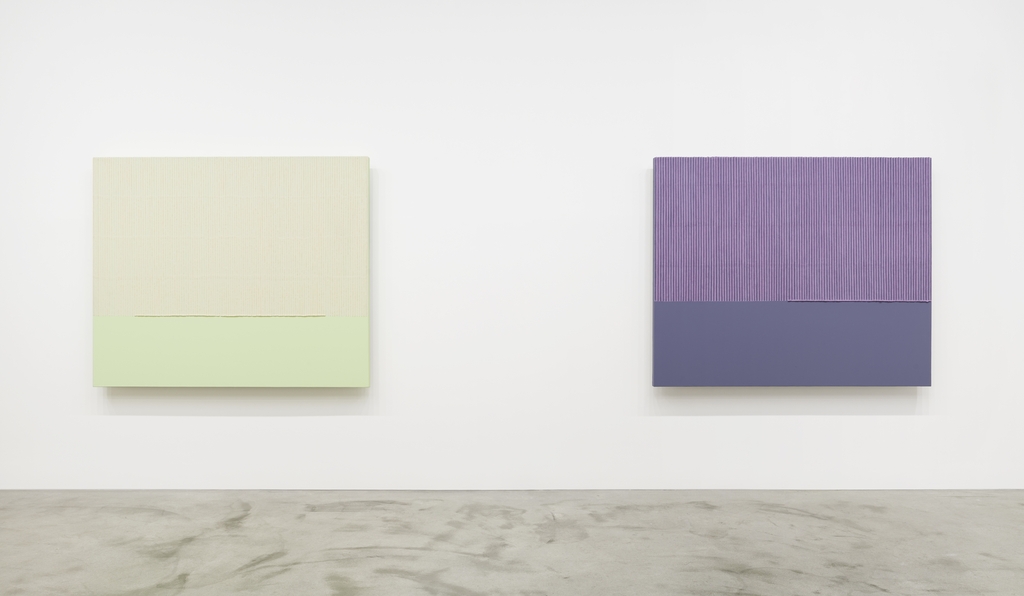