NEW YORK/SEOUL, Sept. 16 (Yonhap) -- Thirty years after its accession to the United Nations, South Korea looks to bring to fruition its steadfast push for lasting peace on the divided Korean Peninsula based on support from the international organization, the country's U.N. ambassador has said.

During an interview with Yonhap News Agency on Wednesday (New York time), Ambassador Cho Hyun touched on the unfinished business of ending security vulnerabilities on the peninsula but highlighted South Korea's enhanced status at the U.N. over the last three decades.

"We will continue our diplomatic efforts on the U.N. stage to ensure we can achieve progress in the Korean Peninsula peace process, including securing support for inter-Korean dialogue, engagement and cooperation," Cho said. 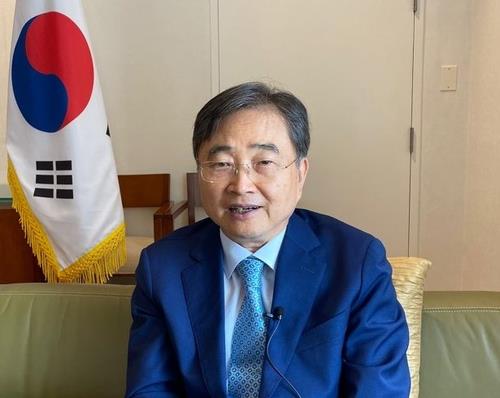 Seoul's entry into the U.N. was a culmination of decadeslong diplomatic efforts, including a policy initiative under the former Roh Tae-woo administration from 1988-93 to build ties with then communist bloc nations, such as the Soviet Union.

Cho said his personal goal in his capacity as the ambassador is to bring to fruition Seoul's ongoing process to foster lasting peace on the peninsula, which has been hamstrung by deep-seated mistrust, geopolitics and other factors.

"There should never be a war on our soil," he said emphatically.

Noting that South Korea is still perceived by the U.N. as a country beset by persistent security vulnerabilities, Choi said, "We can't just relish the pleasure of celebrating the 30th anniversary of our accession to the U.N."

"The establishment of peace on the peninsula still remains a task for us to resolve," he added.

The security realm aside, South Korea has made strides in terms of its financial contributions to the U.N. and its efforts to jointly tackle global health and other issues, including the ongoing COVID-19 pandemic and climate change.

"Thirty years after it won U.N. membership in 1991, South Korea took 11th place in terms of the share of regular budget contributions to the organization," the ambassador said, noting the possibility the country can be among the top 10 contributors next year.

Asked to pinpoint some of the milestones in South Korea's activities at the U.N., Cho catalogued a set of events including the inauguration of former Foreign Minister Ban Ki-moon as the U.N. secretary general in 2007 and the first election of South Korea as a nonpermanent member of the U.N. Security Council in 1995.

"Especially this year, President Moon Jae-in plans to speak at a high-level session of the UN Sustainable Development Goals (SDG) Moment, and the BTS band will also be there," he said, referring to the session slated for later this month to discuss efforts for progress in achieving the SDGs.

Asked what he wants to achieve before the end of his stint at the U.N., Cho highlighted his commitment to seeking progress in Seoul's efforts for enduring peace on the peninsula.

"That is also a desperate task for our future generations, who will shoulder the responsibility for the future of the Korean Peninsula," he said.

"Our government's unswerving position is that dialogue and diplomacy is the only path forward to achieve substantive progress in the resolution of the Korean Peninsula issue."
(END)