(ATTN: UPDATES with Moon's interview with U.N. official, more remarks based on unofficial translation of his speech)
By Lee Chi-dong

Moon spoke while attending the opening session of the second Sustainable Development Goals Moment (SDG Moment) event, along with the members of BTS, a globally renowned South Korean boy band and Moon's special envoy for "future generations and culture."

The SDG Moment is designed to galvanize the campaign to achieve the U.N.-led goals adopted in 2015.

Moon stressed that cooperation beyond borders is the very first step to resolve such global problems as the COVID-19 pandemic and climate change.

"Guided by the conviction that no one is safe until everyone is safe, the (South) Korean people will join the journey of inclusive international cooperation as your most reliable and steadfast companion, leaving no one behind," he said in a speech. 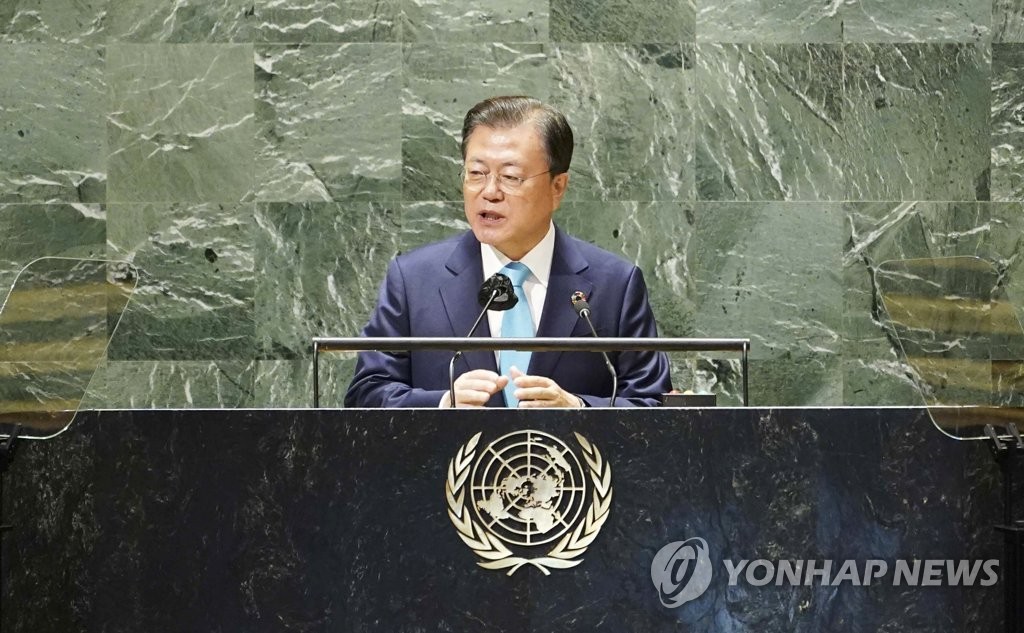 South Korea has pledged to donate US$200 million to support lower-income economies through the COVAX program.

As a pillar of global vaccine production, he added, the country will continue efforts to expand the supply of vaccines.

He also emphasized the importance of cross-border cooperation in response to the climate crisis and reaffirmed that Seoul will finalize its specific plan in late October for going carbon neutral by 2050.

On the occasion of the U.N. climate action in November, known as COP 26, South Korea will submit its plan to again raise its 2030 Nationally Determined Contribution (NDC), he added.

Among other key tasks are resolving the digital gap and inequality and pooling "the wisdom of for intergenerational co-existence."

"All generations, as we strive to transcend the boundaries of nationality, race, and gender to communicate and connect to one another, must recognize that after all, we are part of 'one planet'," he said. "We must not forget, in particular, that the future belongs to our future generations."

Moon noted that the members of BTS have joined the SDG Moment event in their capacity as his special envoy for future generations and culture.

He voiced hope that "Today's gathering will serve as an opportunity to mobilize the future generations' goodwill and action towards sustainable development." 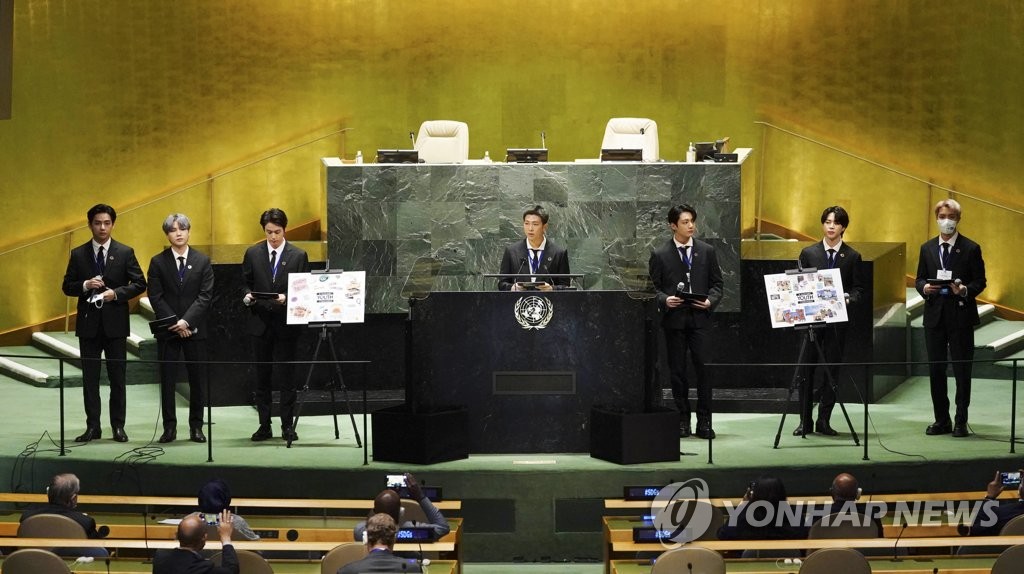 By participating in the SDG Moment session, the president has enhanced South Korea's stature as a leading nation in coping with major pending global issues, including poverty, climate change and inequality, according to his office.

In particular, he has contributed to drawing the "sympathy of future generations" for efforts to achieve the SDGs by doing so along with BTS, it stated.

Following the session, Moon and BTS spoke with Melissa Fleming, the U.N.'s Under-Secretary-General for Global Communications, in an interview.

Asked why he picked BTS as special envoy, the president pointed out the significance of sustainable development for future generations.

He said if the world fails to achieve the SDGs, the agony of its consequences will be entirely on future generations.

He said BTS is deemed to be able to help attract their participation by delivering messages of sympathy and hope to the younger generation in trouble from COVID-19 and returning the love it receives "with good influence."

Moon arrived here on Sunday on a trip primarily meant to attend the annual meeting of the U.N. General Assembly. He is scheduled to deliver a keynote speech during the session on Tuesday.