SEOUL, Sept. 27 (Yonhap) -- The Seoul city government said Monday a new public art museum will be built in southwestern Seoul, with a plan to open in 2024.

Sitting on a 7,342-square-meter plot of land near the Geumcheon ward office, the first public art museum in the area is expected to enrich cultural experiences and help narrow the cultural gap, the city said.

"Museum of Daily Life" by the architect team led by Kim Chan-joong was selected as a final design proposal for the museum in June, the city said, adding the city is working on a detailed plan with architects and construction experts. The city will begin construction in March next year.

A special exhibition offering a preview of the soon-to-be-built museum will open at Nam-Seoul Museum of Art on Tuesday and runs through Nov. 7.

A total of 20 artists and artist groups will show their experimental works of art, under the themes of community and media, in the forms of installation, photos, sounds, video and augmented reality. 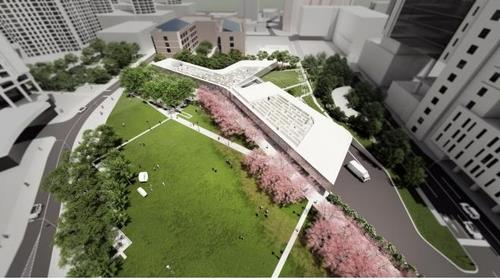