SEOUL, Sept. 30 (Yonhap) -- The top nuclear envoys of South Korea and the United States were set to meet in Jakarta on Thursday to discuss joint efforts to resume dialogue with North Korea, after its leader Kim Jong-un voiced a willingness to restore inter-Korean communication lines following tensions over recent missile tests.

The talks between Seoul's chief nuclear envoy, Noh Kyu-duk, and his U.S. counterpart, Sung Kim, come as Seoul and Washington are strategizing on humanitarian aid, confidence-building measures and other steps to encourage Pyongyang's return to dialogue.

Striking a conciliatory note, the North Korean leader told Wednesday's parliamentary session that he is willing to reactivate the cross-border communication lines in early October though he discounted the U.S. overtures for dialogue as a cover for hostility toward the North, according to the Korean Central News Agency.

Noh and Kim are expected to exchange their assessments of the leader's speech, the North's intentions behind its recent saber-rattling, including Tuesday's test-firing of a newly developed hypersonic missile, as well as inducements for dialogue.

The two sides will also discuss President Moon Jae-in's recent proposal for the declaration of a formal end to the 1950-53 Korean War, which Noh has said was the "most effective" among confidence-building measures with the North.

On the humanitarian front, Seoul and Washington have been discussing various measures for vulnerable people in the impoverished country, such as cooperation in public health, antivirus quarantine, sanitation and clean water.

Ahead of this week's talks, both Noh and Kim have stressed their governments' steady commitment to diplomacy with the North, with the former calling the current juncture a crucial point for the resumption of peace efforts, and the latter saying the North's missile activities have not changed the U.S.' determination for dialogue.

Thursday's meeting follows their last in-person talks in Tokyo a little over a fortnight ago. Noh and Kim also met in Seoul and Washington last month in an indication of stepped-up diplomacy to reengage with the North. 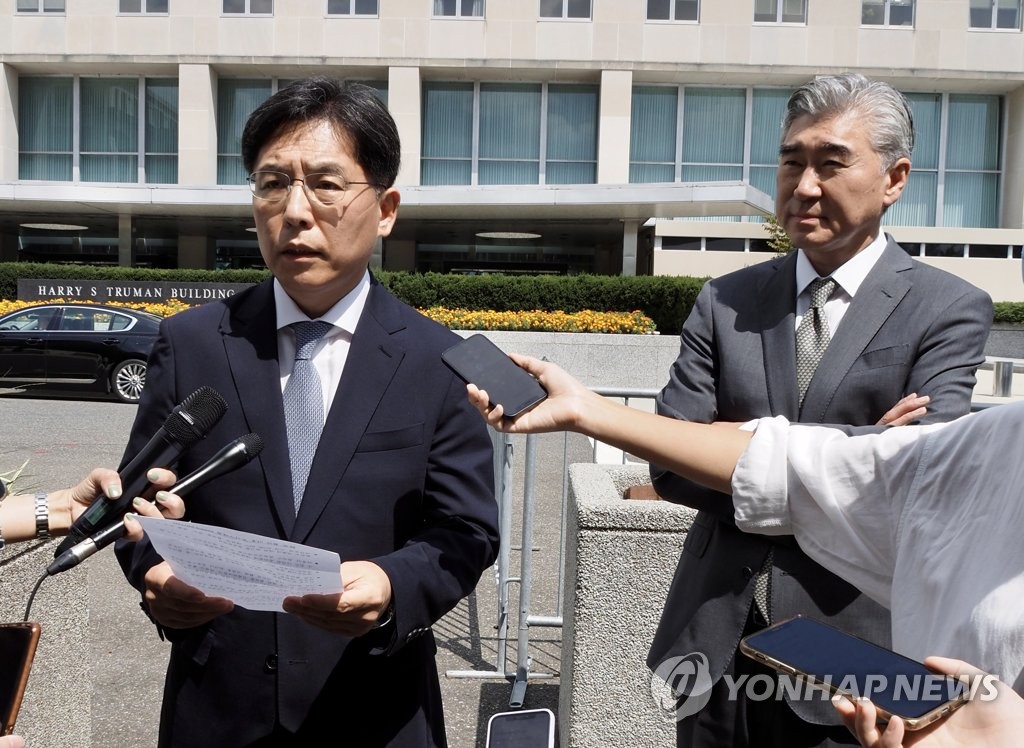