WASHINGTON, Oct. 5 (Yonhap) -- South Korea enjoys a vast amount of soft power in the international community but has to contribute more diplomatically to the global community to be able to put its newly found influence to use, experts in the United States and South Korea said Tuesday.

In an online event cosponsored by the Korea Foundation and Center for International and Strategic Studies (CSIS), a Washington, D.C. based think tank, experts also argued an expansion and right use of its soft power may help South Korea improve its ties with other countries, including Japan.

"If you take those three criteria and you apply them to Korea, you would see that Korea really is well endowed with soft power on culture," he said. 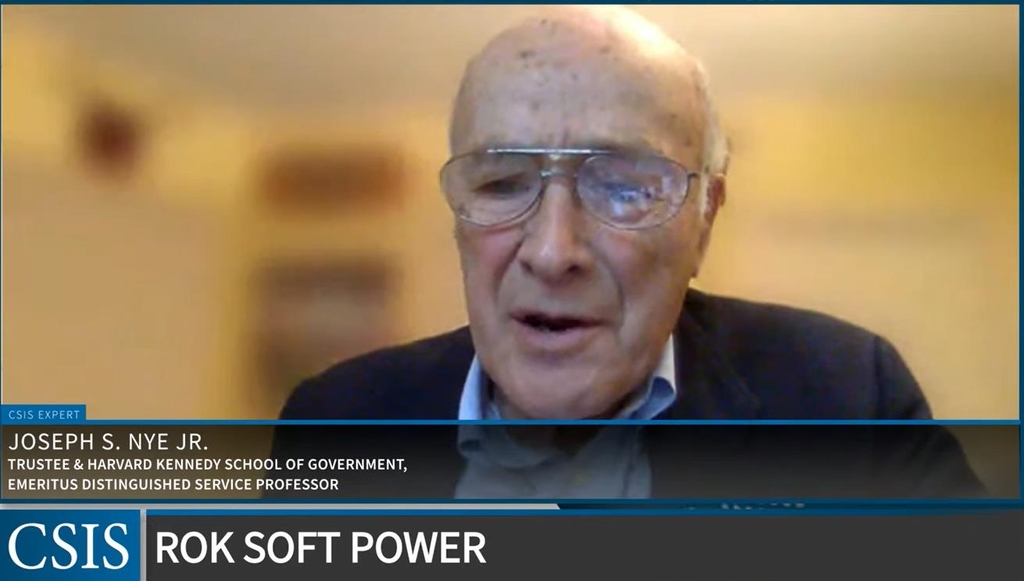 Also on the domestic side, South Korea presents a "remarkable success story," Nye added, noting the country has achieved its economic success, as well as a political success by creating a vibrant democracy.

"But here's an area where I personally think Korea could do more. I think Korea could be outstanding in terms of demonstrating through its international policies what success means," said Nye. "And if I were to say of the three pillars, resources for soft power, to my mind that would be the one that Korea might do more of."

Scott Snyder, senior fellow for Korea studies at the Council on Foreign Relations, said South Korea's soft power coming from the cultural side can be helpful economically but that it alone cannot help achieve the country's global objectives.

"I think that soft power can be helpful ... It might be useful in trying to achieve some economies," said Snyder.

"But ultimately, I think that for South Korea ... having the power of attraction is like having a great playmaker on your team, but you still need a closer. And I think that maybe the playmaker can improve, but without the closer or without taking the role of the closer, it can be very difficult to fully achieve the core foreign policy objectives that are most central I think to South Korean interests," he added.

Nye insisted doing more good abroad will be good for South Korea in the long run.

"When you look at the broadening of the agenda beyond just security and you include climate and pandemics, which are going to be extremely important for this younger generation that is being attracted by Korean popular culture, this, I think, is a very important avenue for South Korea," he told the event that he took part in virtually.

Victor Cha, Korea Chair and senior vice president at CSIS, said using and expanding South Korea's soft power may also help improve its ties with its neighboring countries such as Japan, whose relationship with South Korea is currently at its lowest ebb.

"There's a lot of Korean soft power attraction in Japan as you all know well -- food, culture, music -- all these sorts of things. So I think if we were going to try to get a new start in the relationship, the low hanging fruit would be something on the soft power side," he said.