SEOUL, Oct. 14 (Yonhap) -- A Seoul court on Thursday upheld a disciplinary measure that the justice ministry took against then Prosecutor General Yoon Seok-youl for alleged misconduct last year in what could be a blow to the now leading opposition presidential contender.

In December, the justice ministry suspended Yoon for two months, accusing him of violating political neutrality and other misconduct amid a row between Yoon and then Justice Minister Choo Mi-ae over reform of the prosecution.

Yoon immediately filed lawsuits seeking an injunction on the measure and its ultimate revocation, disputing the alleged misconduct and claiming flaws in the disciplinary process. He was reinstated about a week later as a court accepted his injunction request.

Yoon ultimately resigned as prosecutor general in March and is now a leading presidential hopeful of the main opposition People Power Party.

On Thursday, the Seoul Administrative Court ruled that the two-month suspension should be retained.

The decision is expected to be symbolic as Yoon has already stepped down as prosecutor general, though it could deal a blow to his image by undermining his stance that the disciplinary measure is baseless and politically motivated. 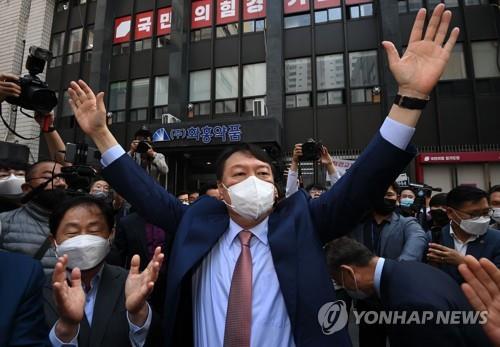