SEOUL, Oct. 27 (Yonhap) -- The government plans to pay about 960 billion won (US$820 million) to the victims of the bloody 1948-1954 suppression of a civilian uprising on Jeju Island, the interior ministry said Wednesday, marking the largest state compensation for civilian victims connected to past tragedies.

The Ministry of the Interior and Safety said the government has finalized the plan to pay compensation of 90 million won per person to 10,101 victims of the so-called Jeju April 3 incident.

If the individual compensation is multiplied by the number of victims, the total amount is 959.59 billion won, the biggest amount of compensation and damages paid by the government to the victims of a single historical incident. 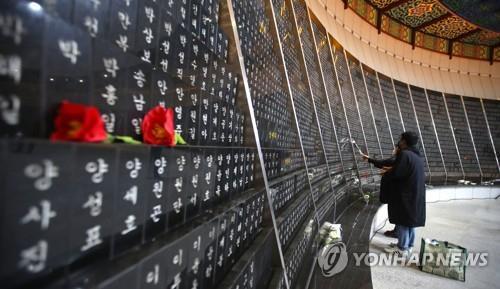 In terms of the amount of per-person compensation, however, it is less than 132 million won paid in late 2000s to each of the victims of a massacre of "leftists" in Ulsan, southeast South Korea, during the 1950-53 Korean War.

On April 3, 1948, Jeju islanders began protesting against U.S. military-led rule following Korea's liberation from Japan's 1910-1945 colonial rule. The then-government distorted the uprising as a communist riot and massacred an estimated up to 30,000 civilians, about 10 percent of the island's population at the time, in armed crackdowns over the subsequent years.

The compensation plan was finalized after the opinions of the victims' bereaved families were collected and the actual payment will be made after the National Assembly completes the relevant legislative process, the ministry said.

It said the latest compensation plan excludes the victims who have already received payments through individual lawsuits or the designation as persons of national merit and those who have no bereaved family.

The state compensation includes not only actual damages, such as medical expenses, but also lost profits and mental damages, it explained.

The government plans to pay the compensation in stages and a budget of 181 billion won will be earmarked for that purpose next year.