Moon issued the instruction after returning from a three-nation European trip that included a summit in Hungary with the four Visegrad Group countries, senior presidential secretary for communication Park Soo-hyun said in a Facebook posting.

Park quoted Moon as saying that companies are well aware of how dynamic the V4 countries are, but people and the media don't appear to be, and the government should inform people about the countries in detail and strengthen cooperation with them.

"V4 represents the biggest destination of investment in the European Union and about 650 South Korean companies already have a presence there," Moon was quoted as saying. "Compared with Western European economies that are in the doldrums or slumps, this region is growing dynamically."

Moon also said South Korea and the four nations have similarities in that they have achieved democracy after overthrowing military-led authoritarian regimes or communism, according to Park.

Moon instructed aides to ensure cooperation with the V4 nations will continue in the next administration too, Park said. 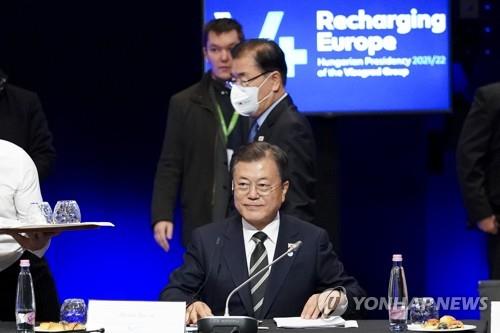