SEOUL, Nov. 9 (Yonhap) -- South Korea was set Tuesday to hold a ceremony launching a new frigate named after a warship torpedoed by North Korea in 2010, the Navy and state arms procurement agency said.

The ceremony for the 2,800-ton frigate, Cheonan, was scheduled to take place at the shipyard of Hyundai Heavy Industries Co. in Ulsan, some 410 kilometers southeast of Seoul, as the Navy still has potent memories of the North's deadly attack.

The 1,200-ton corvette Cheonan sank near the Northern Limit Line, a de facto western inter-Korean sea border, in March 2010, after a North Korean midget submarine fired a torpedo at it, killing 46 sailors.

The unveiling of the Cheonan carried a symbolic meaning for the survivors of the attack and bereaved families who have wished to see the new warship named after the ill-fated corvette and commissioned to fulfill its unfinished mission of safeguarding the maritime border.

Some 100 people, including Defense Minister Suh Wook and Chief of Naval Operations Adm. Boo Suk-jong, were set to join the event to transfer the frigate onto the water for the first time.

Striking a sour note, Choi Won-il, the captain of the corvette at the time of the sinking, said he would not attend the event in protest over the state-run communications standards panel's recent decision not to take issue with social media video clips raising conspiracy theories behind the cause of the sinking.

The frigate, Cheonan, is the seventh Daegu-class warship produced as part of South Korea's frigate acquisition program, code-named FFX Batch-II. The Navy seeks to procure eight vessels in total under the program designed to replace the aging fleet of 1,500-ton frigates and 1,000-ton corvettes.

The new vessel is equipped with a 20-mm Phalanx close-in weapon system, anti-ship and ship-to-ground guided missiles, and underwater missiles, as well as hull mounted and towed array sonar systems.

"The frigate is the latest vessel equipped with sturdy, homegrown weapons systems, and we expect it to safeguard the West Sea by honoring the noble sacrifices of the sailors and inheriting their will for national defense," an official at the Defense Acquisition Program Administration said.

The Cheonan is expected to be delivered to the Navy in 2023 and put into service the following year, a Navy official said.

In March, President Moon Jae-in made public a decision to christen the new frigate the Cheonan during an annual event marking the West Sea Defense Day commemorating Navy sailors' contributions to maritime security. 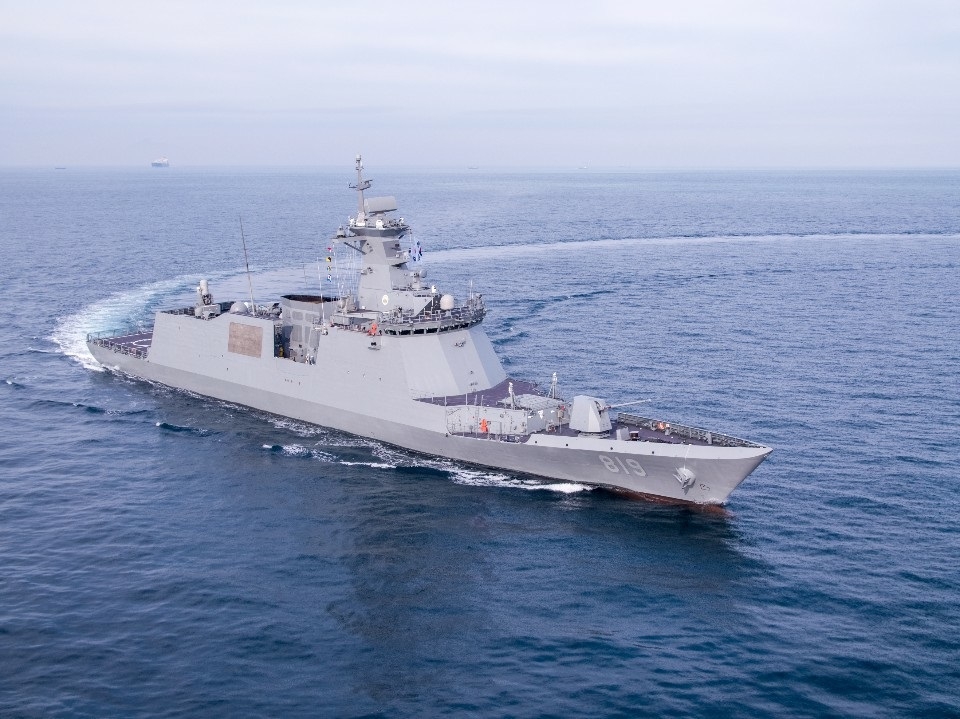