SEOUL, Nov. 12 (Yonhap) -- The U.S. State Department official in charge of East Asian and Pacific affairs on Friday emphasized the need for closer cooperation between Washington and Seoul to ensure the resilience of major global supply chains and to protect critical technologies from excessive dependence on a single country.

Assistant Secretary Daniel Kritenbrink said the issue was discussed in a string of meetings he held with senior South Korean officials here, which he described as a "productive" exchange.

"One of the issues that we did discuss was related to economic security," he said in an exclusive interview with Yonhap News Agency at the U.S. ambassador's residence in Seoul.

He stressed, "It's in our collective interest to ensure that all of us are building resilient supply chains resistant to disruption, and avoiding situations where all of us are overly dependent on one country or one market for those critical supply chains." 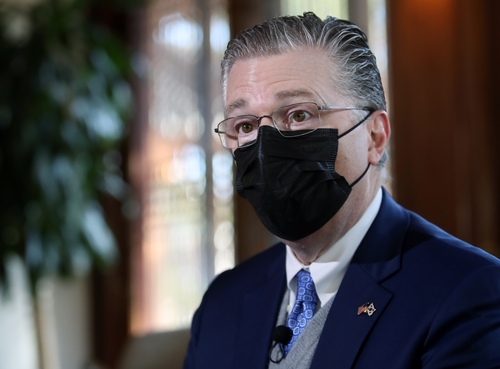 He was wrapping up a three-day visit here as part of his first overseas trip since assuming the post in September.

The choice of Seoul was intended to send "a clear and unmistakable signal" about the emphasis that Washington places on its regional security.

The shared prosperity of South Korea and the U.S. in the future is "entirely intertwined," he said, adding that, "Our success is your success, and vice versa."

He noted that South Korea is a global leader in such key sectors as semiconductors and batteries and welcomed new investment plans in the U.S by leading Korean companies.

Major South Korean companies in the semiconductor, battery and auto sectors announced over $40 trillion won (US$35.3 billion) combined investment plans in the U.S. in May, when their CEOs accompanied President Moon Jae-in on his visit to Washington for a summit with President Joe Biden.

Asked about South Korea's dilemma, sandwiched between China and the U.S., he said Washington is concerned about a range of Chinese actions in recent years, some of which are believed to undermine the rule-based order.

"We do have concerns about various Chinese efforts to use economic coercion against various countries across the region," he said. "We've made very clear that the way that we look at our relationship with China is primarily through the lens of competition. But we believe that competition should be carried out very responsibly."

Regarding news reports that Biden plans to hold virtual summit talks with his Chinese counterpart Xi Jinping next week, Kritenbrink said, "We want to avoid any situation where there's a potential miscalculation that could lead to a confrontation."

On North Korea, he reaffirmed that the allies share the common goal of denuclearization and peace on the peninsula, with Washington leaving the door open for diplomacy with Pyongyang "without preconditions."

"We think the ball is in Pyongyang's court. We have indicated our willingness again to engage without preconditions ... We're awaiting a response from North Korea as well," he said.

He was guarded about whether he had talks with South Korean officials on the proposed declaration of a formal end to the 1950-53 Korean War.

Kritenbrink said he also had a "very productive exchange of views" during his meetings with the presidential nominees of South Korea's ruling and main opposition parties -- Lee Jae-myung of the Democratic Party and Yoon Seok-youl of the People Power Party.

He said he used the meetings as opportunities to convey Washington's strong commitment to its alliance with Seoul.

"I personally was quite gratified that both of the candidates stated their strong support for the alliance between our two great countries, and that alliance would continue in the years ahead," he added.