Lee of the liberal Democratic Party garnered 35 percent support against Yoon of the conservative People Power Party's 36 percent, according to the survey of 1,004 adults conducted Monday through Wednesday by Embrain Public, Kstat Research, Korea Research and Hankook Research. 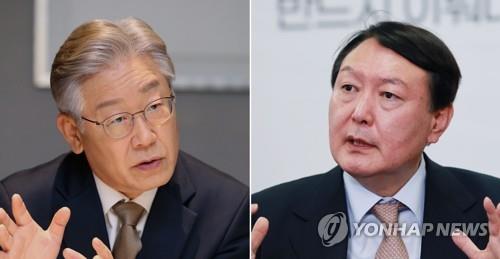 Ahn Cheol-soo, the presidential candidate of the minor opposition People's Party, came third with 5 percent, followed by Sim Sang-jeung of the progressive Justice Party with 4 percent.

When asked about the candidates' likelihood of winning the March 9 election, 42 percent of the respondents chose Yoon, while 38 percent picked Lee.

Support for the PPP came to 36 percent against the Democratic Party's 33 percent, narrowing the difference to 3 percentage points from last week's 8 points.

The survey had a margin of error of plus or minus 3.1 percentage points at a 95 percent confidence level.