(ATTN: UPDATES with more details throughout)
By Shim Sun-ah

SEOUL, Nov. 24 (Yonhap) -- South Korean megastar BTS was nominated Tuesday (U.S. time) for the best pop duo or group performance at the Grammy Awards for the second year in a row.

The septet was nominated for the pop genre prize for their megahit "Butter," in a virtual ceremony streamed live.

The group, however, did not score any nomination for the awards show's top four "general field" categories.

2021 marks the second consecutive year BTS was nominated for the best pop duo or group performance after garnering their first-ever Grammy nomination last year for "Dynamite."

"Butter" was recognized alongside Tony Bennett and Lady Gaga's "I Get a Kick Out of You," Justin Bieber and Benny Blanco's "Lonely," Coldplay's "Higher Power" and Doja Cat and SZA's "Kiss Me More."

Tuesday's feat came just days after BTS raked in three awards, including the top honor of the artist of the year, for "Butter" at the American Music Awards held in Los Angeles Sunday.

BTS, if it wins a Grammy, will make history by becoming the first K-pop artist to sweep all three major U.S. awards, which include the American Music Awards and the Billboard Music Awards.

At the Billboard show in May, BTS took home four awards, including top selling song (for "Dynamite"). 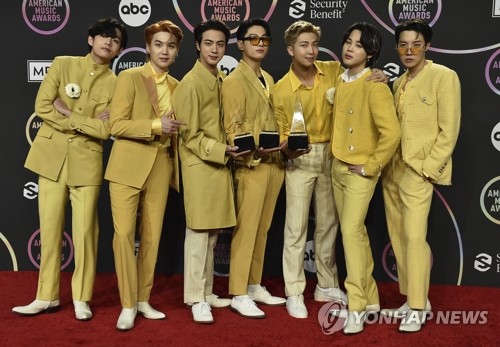