Jang, 48, managed the Heroes from 2016 to 2019, and they were runners-up to the Doosan Bears in the 2019 Korean Series. Jang was not brought back after his contract ran out in 2019 and had since been working as a color commentator for a sports cable station.

Jang had previously worked in baseball operations for the Heroes, and he is now getting his first opportunity to run a front office. 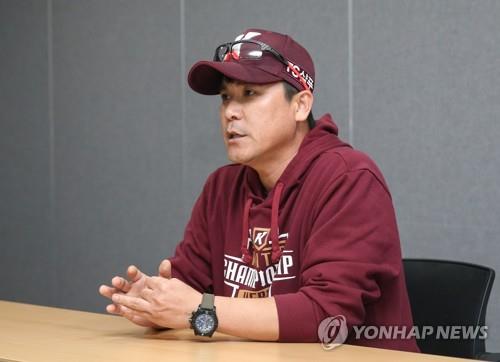 He spent the final three years of his nine-year Korea Baseball Organization (KBO) playing career with the Tigers before retiring in 2004.

Jang is replacing Cho Kye-hyeon, who stepped down after the end of this past season to take the fall for a dismal season.

The Tigers went 58-76-10 (wins-losses-ties) to finish 10.5 games out of the postseason. They also cut ties with manager Matt Williams with one year left on his contract, after the American skipper failed to guide the club to the postseason in any of his first two seasons.

Jang said he was "extremely happy" to take the GM position for the franchise that has won the most Korean Series titles, with 11.

"I've always wanted to become the GM of the Tigers, a storied club with the biggest fan base in the league," Jang said. "I will first try to determine if we have all the necessary systems in place to run a strong baseball club."

Asked what he'd thought of the Tigers when he saw them from the broadcast booth, Jang said the team had been disappointing, without elaborating further.

"I'll see how our data analysis, training and scouting departments have been operating," Jang added. "I'll try to rebuild the Tigers dynasty."

Under the former ownership of Haitai, the Tigers won five championships in the 1980s, including four in a row starting in 1986, and four more in the 1990s.

Jang will begin work Thursday, when the KBO is scheduled to announce the list of free agents.

The Tigers are expected to appoint a new manager in the coming days.