SEOUL, Nov. 24 (Yonhap) -- The funeral home of former President Chun Doo-hwan was swarmed with far-right conservatives on Wednesday, while most mainstream politicians kept their distance from paying respect to the former dictator.

Chun, an ex-Army general who served as president after seizing power through a military coup in 1979, died Tuesday at age 90 from chronic ailments. He had faced widespread condemnation for the brutal crackdown on a 1980 pro-democracy uprising in the southwestern city of Gwangju.

The mourning altar set up at Yonsei University Severance Hospital in western Seoul remained mostly quiet Wednesday morning, but the surviving family later received between approximately 200 and 300 supporters of Our Republican Party (ORP), a fringe conservative party, in the afternoon.

Mourners were mostly Chun apologists, all presumably over 60, and wore masks adorned with the party's signature taegeuk emblem. They took turns in groups of 20 to pay condolences due to virus guidelines.

"Our party is aware of the pain suffered by victims of the May 18 uprising and insists that such history should not be repeated," ORP chief Cho Won-jin told reporters after paying condolences.

He, however, raised complaints against what he described as "biased media reports" on Chun's merits and faults as president.

Conservative activist Ju Ok-soon said "the truth will be revealed whether Chun is a criminal or not" when the two Koreas become unified.

A minor shouting incident broke out when a person appeared holding a signboard that said "Chun Doo-hwan is a murderer," but physical clashes were prevented by on-site police officials

Most mainstream politicians stayed away from the funeral home, but Rep. Joo Ho-young, former floor leader of the main opposition People Power Party, decided to pay respect, remembering his past ties with the late president. 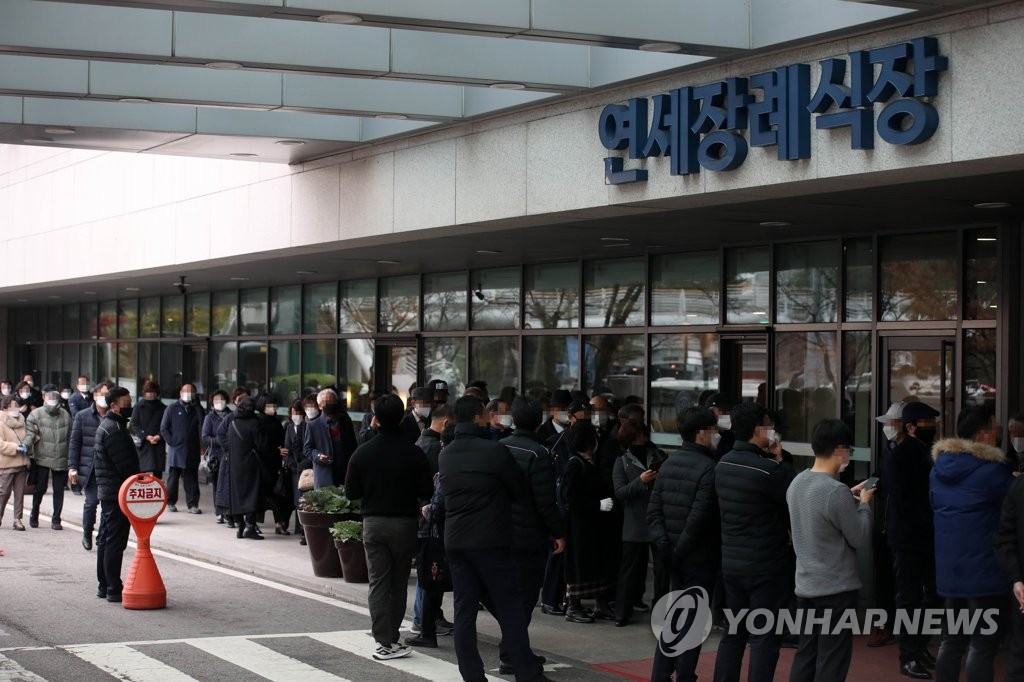