The Bank of Korea (BOK) also revised up its consumer inflation outlook for 2021, saying the policy rate still remains "accommodative," leaving the possibility for yet another rate hike in the first quarter of next year.

As widely expected, the BOK's monetary policy board voted to raise the benchmark seven-day repo rate by 0.25 percentage point to 1 percent.

The hike put an end to 20 months of the policy rate staying in the zero range after the central bank slashed it by a half percentage point to 0.75 percent in March last year. Two months later, it trimmed the rate again to an all-time low of 0.5 percent.

The rate had stayed at the record low level until August this year, when the central bank delivered its first pandemic-era rate hike of a quarter percentage point.

Also Thursday, the BOK kept its 2021 growth outlook at 4 percent, while predicting a 3 percent advance in 2022, unchanged from its August projections.

Still, the central bank revised up its inflation outlook for this year to 2.3 percent from 2.1 percent forecast three months earlier and raised the projections for next year from 1.5 percent to 2 percent, citing high energy prices and a bound in consumption. 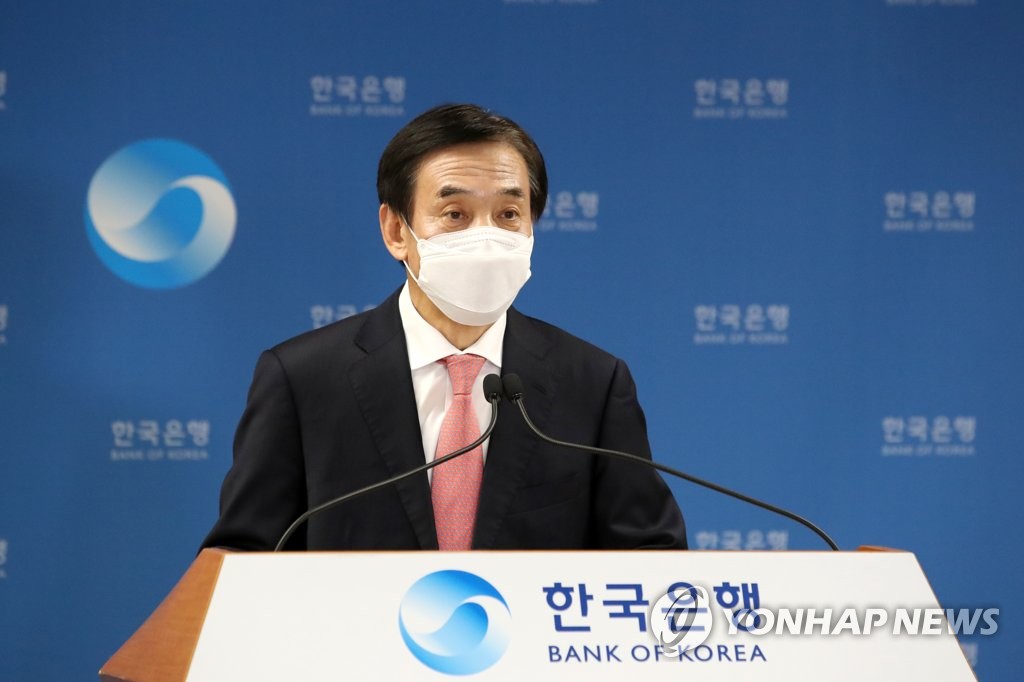 In a press briefing via video links, BOK Gov. Lee Ju-yeol said that Thursday's rate hike decision was not unanimous, with one board member calling for a freeze in borrowing costs.

Lee said it viewed the current 1 percent interest rate as still "accommodative," saying the rate has been "normalized" after it had been slashed to the lowest level to cope with a crisis caused by the global pandemic.

"The hike has brought the interest rate to 1 percent, but it still appears to be accommodative given growth and price trends," he said.

"But it is hard to definitely say when an additional rate increase will take place," he added. "Such decisions will be made by comprehensively looking into all economic indicators and financial market conditions," he added.

Asked if the central bank could announce another rate hike in the first half of next year, Lee said there is "no need to exclude" such a possibility.

Thursday's rate hike came amid concerns over inflation and fast-increasing household debt despite signs of economic recovery from a pandemic-prompted downturn.

South Korea's consumer inflation rose 3.2 percent in October from a year earlier, the fastest on-year gain since January 2012, according to government data.

Behind the accelerating inflation lies strong demand spurred by recovery in major economies, which have been driving up prices of oil and other raw materials.

Household debt has also been cited as a possible drag on the economy as it has grown at a fast clip amid record-low borrowing costs in place for an unusually long period.

According to central bank data, household credit had come to an all-time high of 1,844.9 trillion won (US$1.58 trillion) as of end-September, up 36.7 trillion won from three months earlier.

Exports spiked 24 percent in October from a year earlier to reach the second-largest monthly figure of $55.55 billion, government data showed. During the first 20 days of this month, overseas shipments also expanded 27.6 percent on-year.

Expectations are growing that consumption could rebound amid eased social distancing rules under the living with COVID-19 scheme launched early this month to bring the country gradually back to pre-pandemic normalcy amid high vaccination rates.

"The Korean economy has continued its sound recovery. Although facilities investment has somewhat slowed due to global supply constraints, exports have sustained their buoyancy, and private consumption has shown rapid improvement supported by accelerated vaccinations and the easing of domestic COVID-19 restrictions," the BOK said in a statement.

"Going forward, the improvement of private consumption is likely to grow, while exports and investment are expected to sustain favorable movements," it added.

The BOK voiced concerns over growing inflationary pressure, saying it will adjust the level of its accommodation in its monetary policy stance by taking into account not just the economic recovery but also consumer prices and the fallout from the COVID-19 pandemic.

"The board will judge when to further adjust the degree of accommodation while thoroughly assessing developments related to COVID-19, changes in the pace of growth and inflation, the risk of a buildup of financial imbalances and monetary policy changes in major countries," it said.

The coronavirus still remains a heavy drag on the economy, as the government could tighten containment measures to stop the spread of the virus. On Thursday, South Korea reported 3,938 new COVID-19 cases, a slight decline from an all-time high of 4,115 the previous day.

Despite such worries over the economy, market watchers said the central bank might be raising the interest rate at least once in the first half of next year amid lingering concerns over inflation and household debt.

Some expressed skepticism that the BOK could raise the interest rate consecutively in January and February next year as it could deepen interest payment burdens on many households. They said Lee might also find it hard to remain hawkish before the March 9 presidential election and the end of his term weeks later.

Lee, however, said the BOK's monetary policy should be pursued based solely on economic conditions regardless of political schedules.

According to central bank data, a 0.25 percentage point hike in the policy rate will result in an increase of 2.9 trillion won.