SEOUL, Nov. 25 (Yonhap) -- South Korea's new coronavirus cases fell below 4,000 on Thursday, a day after hitting an all-time high of 4,115. But critical cases and deaths climbed to fresh highs, fueling worries about the virus spread ahead of another pandemic winter. 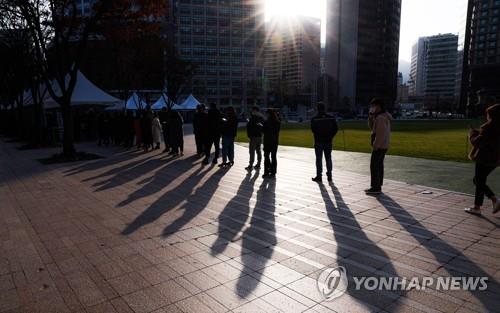 As of 6 p.m., 2,024 new cases had been confirmed, down 48 from the previous day, according to local governments and health authorities, excluding the southeastern city of Busan, which stopped releasing real-time data.

The virus resurgence has been hitting the greater Seoul area hard, where half of the country's 52 million population live.

The capital Seoul saw its infection cases surging to a fresh high of 1,760 on Thursday, followed by 1,102 in the surrounding Gyeonggi Province and 260 in Incheon, 40 kilometers west of Seoul.

"The capital area has nearly reached a point where hospitals can no longer take COVID-19 patients," Prime Minister Kim Boo-kyum said during a briefing Thursday.

"There is a need to expand at-home care for COVID-19 patients, so that we don't further strain medical resources and ensure health care workers focus on patients in serious condition," he said.

Daily infections have soared since the government began easing virus restrictions on Nov. 1 for a gradual return to pre-pandemic life under the three-phase "living with COVID-19" scheme.

As of 5 p.m. Wednesday, 83.9 percent of intensive care unit beds were occupied in Seoul and its surrounding areas, up 0.2 percentage point from a day earlier. The figure was 71.5 percent nationwide.

Son Young-rae, a senior health official, said in a briefing Thursday that the difficulties facing hospitals dealing with COVID-19 patients lay more in the lack of medical staff and hospital systems than in equipment and beds. 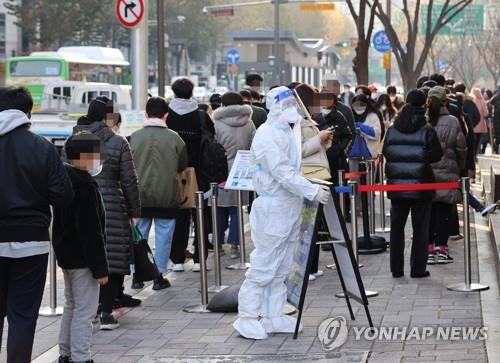 "It is moving beyond our prediction range," Son said during the Wednesday's briefing, adding the government had expected to see such rates only when the daily infections surpassed 5,000.

The KDCA said 79.3 percent of the total population are fully inoculated and 82.5 percent have received their first shots.

Meanwhile, the Ministry of Education on Thursday advised teenagers to get vaccinated for the coronavirus, noting that infection rates among teenagers have recently outpaced those for adults, as the country fully resumed in-person classes nationwide this week.

According to professor Choi Eun-hwa of Seoul National University, chairwoman of the country's inoculation committee, 99.7 in every 100,000 people, younger than 19, were infected with COVID-19, more than the 76 people for the age group of 19 and older, from Sept. 26 to Oct. 23.

Rising infections at schools should be solved through "more vaccinations," Choi said, adding that going back to a hybrid of online and in-person classes was not an ideal option.

"Children made huge sacrifices for the past two years by not being able to attend school," she said, "We should make vaccines more available, as health protocols and antivirus measures are not enough to stop the virus spread."

The committee said 1.18 million, or 42.7 percent of teenagers aged 12-17, have received their first shots, and 17.3 percent were fully vaccinated.