The Cargo Truckers Solidarity (CTS), composed of self-employed truck drivers and those working for companies, said its members across the country commenced the general strike at the beginning of the day to demand an extension of the "Safe Trucking Freight Rates System" designed to prevent dangerous driving and guarantee minimum freight rates for truck drivers. 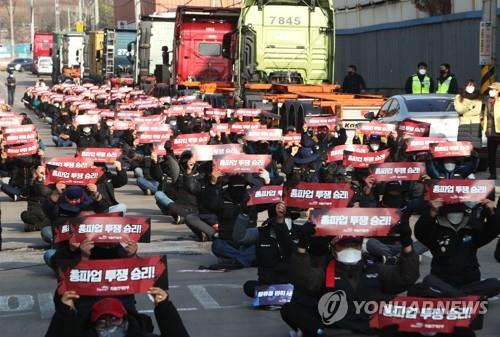 The safe freight rates system took effect last year to impose fines on shipping companies that do not pay certain cargo truck drivers an adequate freight fare but is scheduled to expire next year due to a three-year sunset clause.

The unionized truck drivers are also demanding a full expansion of the safe freight rates system to cover all kinds of trucks and cargo, a hike in freight charges, full coverage of industrial accident compensation insurance and protection of basic labor rights.

The CTS said its first general strike since 2016 will be staged at major seaports and logistics bases, and its members plan to hold a massive protest rally in Seoul on Saturday.

"Cargo truck drivers are forced to drive dangerously, overwork and overload due to a sharp increase in diesel prices and other costs and income reductions," said a CTS official, urging efforts to enhance road safety by guaranteeing a minimum income for the truckers.

Industry watchers fear a logistic disturbance particularly in container transportation, as a large number of drivers for the nation's 8,500 container trucks and 1,500 cement trucks are affiliated with the CTS.

The Ministry of Land, Infrastructure and Transport said it will continue to seek talks with the labor group while implementing emergency transportation countermeasures to minimize damage.

Ministry officials said the strike is expected to have a limited impact on logistics as just 5 percent of the nation's commercial freight trucks, or 22,000 vehicles, are members of the union. 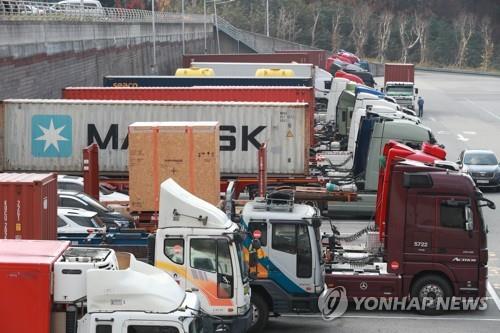 The government has said it is difficult to accommodate the demands of the striking truck drivers because of increased financial burdens on the parts of shippers and transport service operators, whereas truckers have vowed to escalate their collective actions until their demands are met.

In the greater Seoul area, about 2,000 cargo truck drivers are participating in the strike after holding a launch ceremony at the Uiwang inland container depot, Incheon Port, Pyeongtaek Port and other locations in the morning.

In the southeastern port city of Busan, about 600 CTS members declared the launch of their strike in a ceremony while blocking parts of a road leading to major port and logistics facilities, and parking some 500 cargo trucks alongside the road.

In the adjacent South Gyeongsang Province, about 1,400 truckers stopped work, while some 600 drivers took part in a launch ceremony in the southeastern port city of Ulsan. 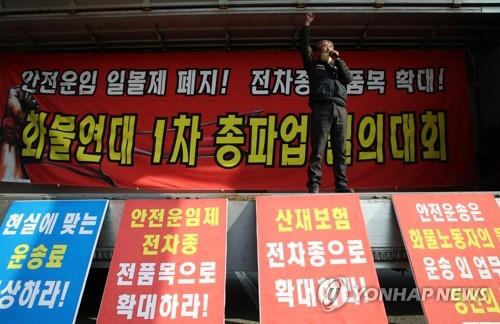