SUWON, South Korea, Nov. 25 (Yonhap) -- A 36-year-old man was sentenced to 22 years behind bars Thursday for beating his 2-year-old adopted daughter to death in yet another shocking child abuse case in the country.

The Suwon District Court also order the man, whose identity was withheld, to receive 200 hours of child abuse treatment programs while banning him from working at children-related institutes for 10 years, convicting him of murder by child abuse.

Prosecutors had demanded life in prison for him on charges of beating the then 33-month-old daughter with a wooden back scratcher, a shoehorn and hands on several occasions between mid-April and early May at their home in Hwaseong, about 40 kilometers south of Seoul, because she was being "naughty."

After repeated beatings, the toddler fell into a semi-coma in early May, but her adoptive parents left her unattended for seven hours, causing her to suffer a cerebral hemorrhage and eventually die several days later.

The court ruled the death was caused by "intentional murder" because the man would have been well aware that any serious blow to the head of a young child could be fatal.

"He had been aware of the possibility and risks of death of the child but did not take any action to help her," the court said.

The court also gave a six-year prison sentence to the 35-year-old adoptive mother, who was indicted on charges of child abuse resulting in death. According to court records, she took her ailing child to a hospital belatedly out of fears it could reveal the abuse.

But the court did not immediately detain the mother following the conviction, given that the couple is the parents of multiple children. The father was kept in custody while on trial.

The case marks the latest in a series of horrible child abuse cases, including the death of the 16-month-old toddler Jung-in last year at the hands of her abusive adoptive mother. The mother was given a life sentence in the first trial. 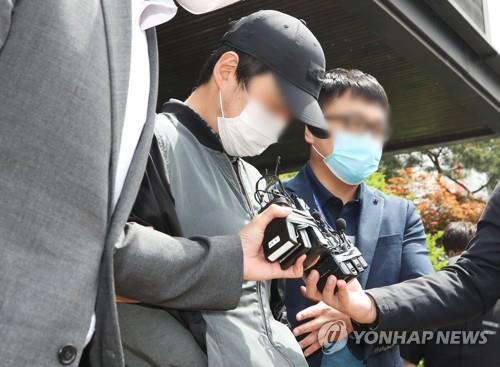