Under the restructuring plan approved by the Seoul Bankruptcy Court early this month, Eastar Jet canceled all of its existing shares held by the company founder's family members, a provincial government, and others, an Eastar spokesman said over the phone.

In the share sale this week, Sung Jung invested 70 billion won (US$58.6 million) to wholly own about 14 million new shares in the carrier, he said. 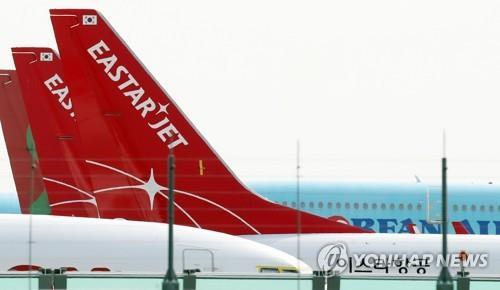 In follow-up steps, Eastar said it will submit documents next week to receive an air operator certificate (AOC) from the transport ministry and resume domestic flights with three B737-800 chartered planes in February.

Eastar has suspended most of its flights on domestic and international routes since March last year, and its AOC became ineffective in May 2020.

It has had difficulties in finding a strategic investor since July last year, when Jeju Air Co., the country's biggest budget carrier, scrapped its plan to acquire the carrier amid the prolonged pandemic.

In January this year, Eastar applied for court receivership to find a way to continue its air transport business through M&A procedures.

The bankruptcy court approved the corporate rehabilitation process for the carrier in the following month.

The court later ordered preservation measures and comprehensive prohibition to prevent creditors from seizing or selling company assets and to freeze all bonds before the carrier's rehabilitation proceedings.

Eastar founder Lee Sang-jik, formerly a member of the ruling Democratic Party of Korea, is currently on trial over allegations of embezzlement and breach of trust.

On Thursday, prosecutors sought a 10-year prison term for Lee and 55 billion won in compensation for allegedly generating more than 50 billion won in financial damage to the carrier.