During the talks, the two sides agreed to step up efforts for an early conclusion of FTA negotiations, which were launched in January, according to the Ministry of Economy and Finance.

They also discussed measures to enhance cooperation in information and communications technology, digital health care and smart cities, according to the ministry.

Some 100 South Korean companies have entered the country, the largest figure in the Commonwealth of Independent States (CIS). As of 2020, it was South Korea's third-largest trading partner among the CIS countries.

The annual high-level meeting, launched in 2018, has served as a chance for the two sides to discuss a wide range of bilateral economic issues. 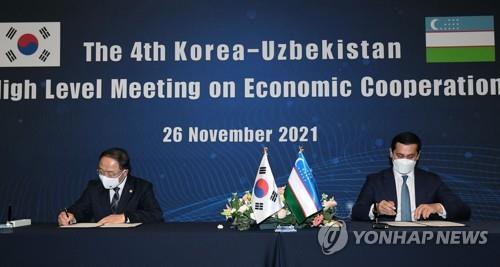