Suh plans to visit the country from Thursday to Friday at the invitation of Chinese Communist Party foreign affairs chief Yang Jiechi, according to the diplomatic sources. Cheong Wa Dae said it had no information to share regarding the trip.

During the two-day visit, Suh is expected to brief Yang on Seoul's latest efforts to formulate an end-of-war declaration with Washington.

The United States helped defend South Korea against invading North Korean forces backed by China, but the war ended in an armistice.

Suh is likely to seek China's participation in the declaration and cooperation in drawing the North back to the negotiation table.

The Moon Jae-in administration hopes the end-of-war declaration will be a starting point for reviving stalled peace talks with the North, as it eyes the Beijing Winter Olympics in February as a possible venue for an inter-Korean breakthrough. 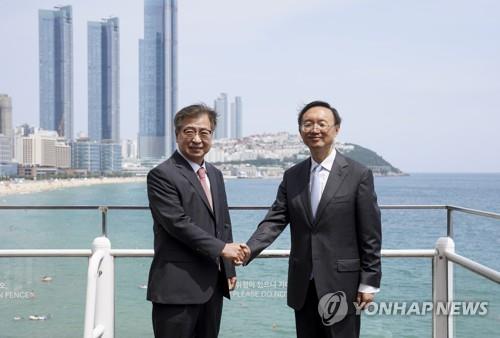