SEOUL, Dec. 2 (Yonhap) -- The National Assembly postponed the passage of the 2022 government budget by one day on Thursday, citing a computation delay and missing the legal deadline by a day.

The DP had initially planned to railroad the bill through a plenary session late Thursday, but last-minute negotiations between the rival parties caused a delay in the finance ministry's computation work, parliamentary sources said.

The final proposal is an increase of 3.3 trillion won from the government proposal and an adjustment from the 607.9 trillion won that was announced earlier Thursday before it was fine-tuned by the parties. 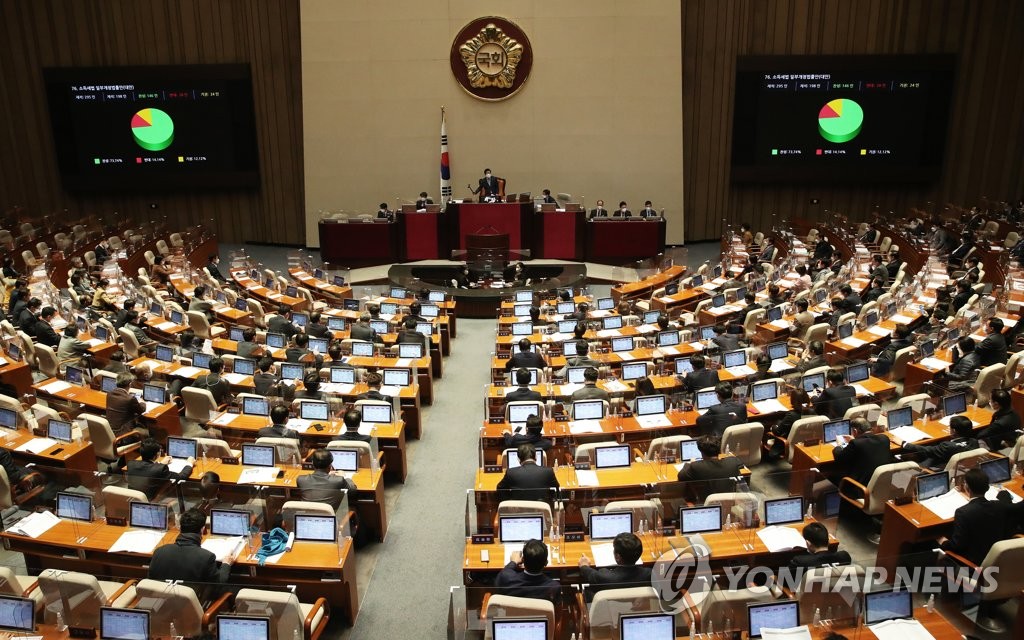 The budget failed to win the endorsement of the PPP because the party objected to the defense ministry's request for a starting budget of 7.2 billion won to build the country's first light aircraft carrier.

The Navy has sought to build a 30,000-ton carrier by 2033 to bolster deterrence against security threats from North Korea and enhance its long-distance operational capability in a region with major maritime powers, such as China and Japan.

The Navy has estimated the total cost of the project at around 2 trillion won.

The PPP balked at the request, saying such an expensive project should be left for the next administration to consider when it takes office in May, especially when the urgency and use of a light aircraft carrier is still in question.

It also noted that the parliamentary defense committee had already slashed the budget from 7.2 billion won to 500 million won.

Citing a feasibility study, however, the DP maintained that the project cannot be delayed any further and restored the budget in full.

Next year's budget is set to include 68 trillion won worth of support measures for small businesses hit by the COVID-19 pandemic.

Compensation for business losses was raised from the current minimum of 100,000 won to 500,000 won, another point on which the PPP disagreed with the DP, saying the minimum should be set at 1 million won.

The total value of local currency coupons to be issued next year was raised from the initially planned 6 trillion won to 30 trillion won.

In other expenditures, the budget for antivirus health care was increased by around 1.3 trillion won to more than 7 trillion won.

While the budget's passage was delayed, the Assembly passed other bills during Thursday's plenary session, including a bill to ratify the Regional Comprehensive Economic Partnership.

The regional trade pact involves 15 nations, including South Korea, China, Japan and Australia, and covers a third of the world's gross domestic product.

It also passed a revision to the Income Tax Act under which people with only one home will be subject to capital gains taxes only if the property is sold for over 1.2 billion won, up from the current threshold of 900 million won.

The revision additionally postpones the government's plan to impose a 20 percent tax on capital gains from transactions of virtual assets from January 2022 to January 2023.