Suh and Yang Jiechi, head of the Chinese Communist Party foreign affairs, are expected to discuss a wide range of issues of mutual concern, including Seoul's push for an end-of-war declaration on the Korean Peninsula and supply chains of key industry materials.

The Korean War, in which South Korea and a U.S.-led United Nations Command fought against invading North Korean forces backed by China, ended in an armistice, not a peace treaty.

China is believed to have expressed its willingness via diplomatic channels to join an end-of-war declaration as one of the signatories to the 1953 armistice agreement.

"The two nations have worked together to achieve the joint goals of the complete denuclearization and the establishment of permanent peace on the Korean Peninsula. I expect closer cooperation to maintain the peninsula situation in a stable manner and to move forward a peace process," Suh said in his opening remarks.

Suh expressed gratitude for China's cooperation with regard to the recent supply crunch of urea solution, a key fluid needed in diesel cars to cut emissions, and voiced hope for close consultations down the road to prevent any recurrences.

Yang stressed the importance of and need for close, strategic communications between the two nations, saying that Beijing seeks to further enhance bilateral ties so as to contribute to peace and development in the region and beyond. 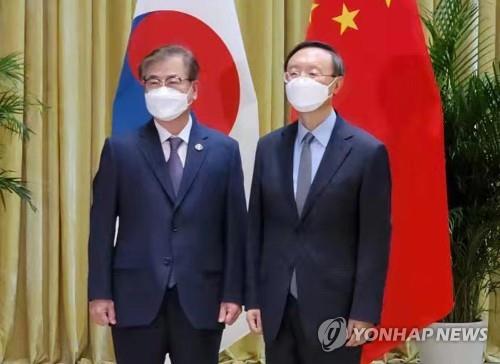 Asked about the prospects of discussions on the declaration, Suh replied the two sides will hold overall discussions.

The two sides "will discuss bilateral relations in general, as next year marks the 30th anniversary of establishing diplomatic ties," Suh told reporters.

Suh is expected to brief Yang on Seoul's latest efforts to formulate the declaration with Washington. He could also ask for China's cooperation in drawing the North back to the negotiation table.

Suh and Yang could also discuss President Moon Jae-in's possible visit to Beijing for the Winter Olympics in February. Seoul is believed to be considering the Olympics as a possible venue for declaring an end to the war. 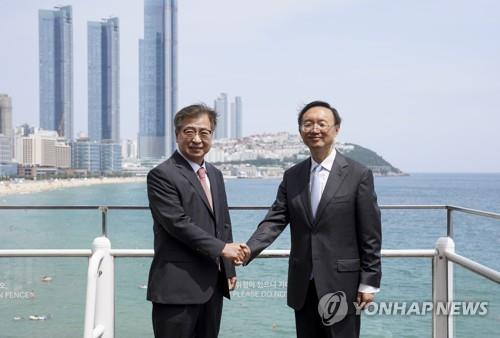