The 5,765-ton Panama-registered vessel carrying 18 Vietnamese crew members went down in waters 154 kilometers north of the East Sea island at around 9:50 a.m. Wednesday, according to the Donghae regional office of the Coast Guard.

Seventeen of the 18 crew members safely escaped from the sinking ship onto a lifeboat and were rescued by the Coast Guard at 4:08 a.m. Thursday while floating in waters 131 kilometers northeast of the South Korean island.

The other crew member remains unaccounted for after being swept away by waves.

A high seas warning has been issued in the area for the second consecutive day Wednesday. 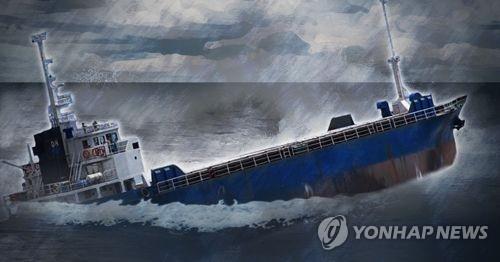 The Coast Guard picked up the SOS signal coming from the ship's emergency position indicating radio beacon through a local user terminal at 4:31 p.m. on the day of the accident and shared the information with Japan's Coast Guard.

Japan's Coast Guard dispatched a patrol ship to the area but could not reach the lifeboat, as it was too far away. A Russian merchant vessel also spotted the lifeboat but could not save the crew members due to harsh weather conditions.